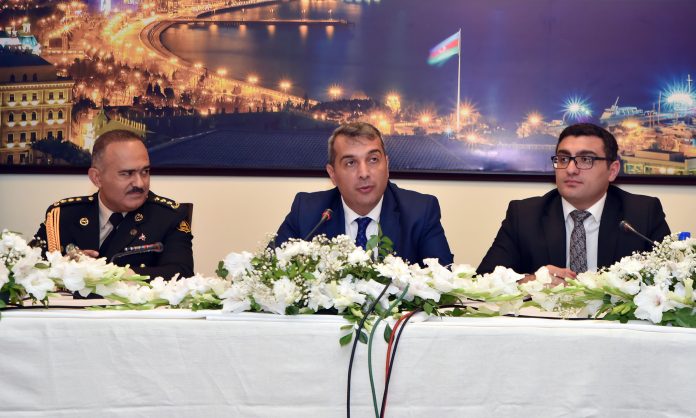 Azerbaijan ever ready to thwart any aggression: Amb. Khazar

ISLAMABAD: Ambassador of Azerbaijan Khazar Farhadov has said that brave Azerbaijani forces had successfully thwarted the Armenian aggression and re-gained its territory illegally occupied by the aggressor Armenia. He added his country greatly valued moral and diplomatic support extended to Azerbaijan by Pakistan during the 44-day Patriotic War.

Ambassador Khazar expressed these views while addressing a press conference in connection with September 27- Commemoration Day, at the embassy premises on Monday. Col Mehman A Novruzov the Defence Attache was also present on the occasion.

While sharing the background information the ambassador said, 2 years back, on 27 September 2020, a counter-offensive was launched in response to Armenia’s yet another large-scale military attack on Azerbaijani Army positions and civilian settlements. The counter-offensive later became known as Operation Iron Fist that led to the Patriotic War. At the end of the 44-day Patriotic War, under the leadership of the Supreme Commander-in-Chief of the Azerbaijani Armed Forces, President Ilham Aliyev, our army liberated Azerbaijan’s territories from Armenian occupation and Armenia was forced to sign an act of capitulation, thus acknowledging Azerbaijan’s historic victory.

He said, as a sign of deep respect for Azerbaijani soldiers and officers, all the martyrs, who fought heroically in the Patriotic War, waved the Azerbaijani flag in the liberated lands and sacrificed their lives for the territorial integrity of Azerbaijan, September 27 is marked as Commemoration Day in Azerbaijan every year.

Ambassador Khazar said the Patriotic War put an end to Armenia’s nearly 30-year-long policy of aggression. Azerbaijan ensured its territorial integrity, and the fundamental rights of nearly one million displaced Azerbaijanis were restored. Azerbaijan, alone ensured the implementation of the relevant UN Security Council resolutions of 1993.

‘I must mention that brotherly Pakistan from the first day of the former Karabakh conflict, as well as the during Patriotic War in 2020 morally and politically supported just position of Azerbaijan and it has been highly appreciated by the Government and people of Azerbaijan’.

When asked to comment on the rehabilitaion process the ambassador said, first Azerbaijani IDPs have already returned to liberated Zangilan region’s Aghali village, which was rebuilt based on the “smart village” concept.

Shusha, the cultural capital of Azerbaijan has already become a venue for international events. “Pakistan Colors” group performed the “Bhangra” dance at the 5th “Kharibulbul” International Folklore Festival which was held in Shusha in May 2022.

Azerbaijan offered Armenia peace immediately after the war. This was perhaps one of a handful of examples in the military history of the world when lands remained under occupation for 30 years, people lived in suffering and deprivation, historical and religious monuments were destroyed, cities were razed to the ground, and more than a million mines planted, and yet Azerbaijan is offering peace. However, Armenia is not interested in peace. The Azerbaijani side proposes delimitation and demarcation but Armenia delays it. We have proposed 5 principles for signing a peace treaty with Armenia. In words, they accepted them, but we do not see it in practice. These all show again that Armenia is not interested in peace.

‘Moreover, in the past few months, Armenia has committed repeated military provocations against Azerbaijan. More than 1,400 new landmines were planted in the Lachin district alone, and these mines were planted in 2021, after the war. This is a flagrant act of terror against Azerbaijan. Since the war ended, more than 240 Azerbaijani citizens have been killed or seriously injured due to landmine explosions’.

To a question Ambassador Khazar said, Armenian armed forces committed large-scale provocations in the Dashkasan, Kalbajar and Lachin directions of the Azerbaijani-Armenian state border on 13th September again. The sabotage groups of the Armenian armed forces using the mountainous terrain of the area and the existing ravine gaps mined the territories and supply roads between the positions of the Azerbaijan Army Units in different directions. But of course Glorious Azerbaijani Army responded and put the enemy back in place.

Ambassador Khazar extended gratitude to Pakistani media representatives for their support in highlighting the Azerbaijan realities among Pakistani public as well as the in the international arena.

The Azerbaijan defence attache to a question said that Azerbiajn Air Force was in the process of enhacing its capabilities for which negotaitons were under way with various countries including Pakistan. He said most of the landmines had been cleared however there were still areas with landmines therefore Azerbaijan authorities are making sure that such areas are fully secured before the return of the IDPs.