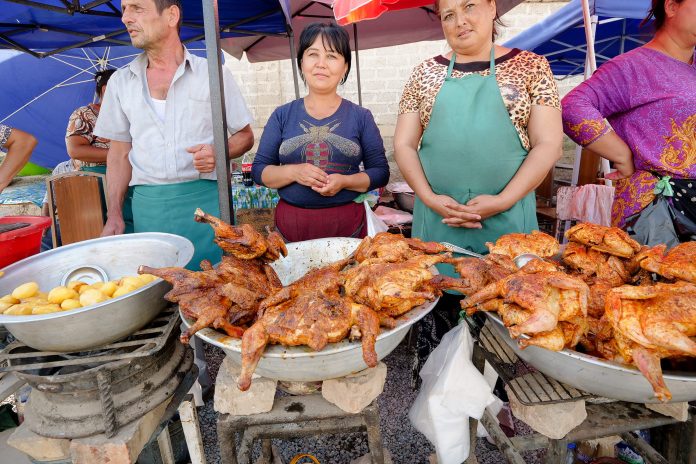 Bazaar is the mirror of any country’s life. A nation’s wealth is demonstrated in a bazaar.

Eastern Bazaar is a center of social life, the focus of an entire people wealth, which demonstrates the authority of the nation.

Here is a tale:

A young prince was going to have a journey to faraway countries and asked his mentor:

– What should I pay attention to during the journey to know the people and their country deeper?

– Wherever you go, pay attention to three aspects of that country, – said the mentor. First, watch the graveyard, then bazaar, then people’s mutual attitude and courtesy. When you visit the graveyard, you will know how the people regard their ancestors and own values. Then, if you walk in a bazaar, you will notice their welfare, lifestyle and mood. If you watch mutual courtesy and respect – you will know people’s upbringing and mutual caring.

In fact, any country can be evaluated by its bazaar’s wealth and cleanliness. Upon a walk through the bazaar, a foreign guest will make a conclusion: “Yes, this nation lives well!”

It is not a secret that if people in any country are hardworking and industrious, their land is fertile, water is clean and abundant, climate conditions are favorable, there is always the wealth, abundance and welfare. Eastern bazaar is coopting bright colors of gifts of the generous Uzbek land, its gardens, fertile fields, and the abundance of bazaars gives the sense of pride in the soul.

From curative greens of spring to remarkable gifts of summer and autumn – all these fill the bazaar with unforgettable local color. Foreign tourists admire diversity of fresh and fruits and vegetables of Uzbekistan, skillful manufacture of Uzbek fabrics and products, colorfulness of clothes.

Its bazaars, which are not closed seven days a week,

I could tell you about its delicious bread confectionaries, raisins

or about its palov, fruits and koumiss (fermented mare’s milk)?

Best quotes of great thinkers about the Uzbek bazaars

“I appointed traders and heads of caravans in every country and region, so that wherever they go – to Khotan, China, India, Egypt, Syria, Rome, Algeria or France, they would bring delicate fabrics and deserving gifts from there. Let them bring information about living conditions and lifestyle of people living in those countries. Let them understand and know their ruler’s attitude and treatment to his citizens in every country.

… A trader, who is in a bad financial position, shall receive enough gold from the treasury to restore his financial situation. If one of peasants cannot afford to do peasantry any longer, he must be given necessary grains and tools for growing crops.

“Rasat toqi (row) is the center of bazaars of Samarkand. There are twice as many streets, bazaars and rows connected to Rasat toqi as gardens and castles. There is no yard, no street without a garden. Even if you climb the castle wall, you won’t be able to see the city (i.e. buildings) because everything is surrounded by gardens. Majority of bazaars are in the row, most of trade also occurs there, and there are few trading people inside the city. This city is the place where all the roads of Maverannahr join and merchants gather. All the wealth and products grown and manufactured in Maverannahr, first gather in Samarkand, then disperse to other countries from here.”

“…Khorezm has turned into a flourishing beautiful region. I went there in the year of 616 (Gregorian 1219-20). Nowhere else I have seen such a crowded and thriving country, all the crops were taken care of, villages located in a line, lots of separate yards and gardens, there are castles in the desert as well. In villages it is hard to find a spot not taken care of. There are lots of green trees, especially mulberries, because they (population) are in need of building wood, and mulberry leaves are food for silkworm. You cannot differentiate a person passing a village from a person walking through bazaar… Almost all cities of Khorezm have shops and stores, bazaars rich in goods, villages without their own bazaars are very rare.”

“The city of Bukhara, being particularly looked after, has seven gates (Bobi Nur, Bobi Fufro, Bob al-Holib, Bob al-Kohandiz, Bob bani Sud, Bob bani Asad, Bob al-Madina), and inside there is Sultan’s palace (Shahriston). The main mosque, in the city center, has several yards, all of them clean… Expensive goods are sold in the city’s Bazaars; roads go in three directions from ravot (bazaar)… There is no such crowded and prosperous city on this continent… There the best foods, remarkable bath-houses, wide streets, clean water and handsome buildings are ready for humans…”

“I bade farewell to Sultan Tormashirin and went to Samarkand. It is one of the very big and exceptionally beautiful cities. It is located on the coast of Vodiy al-Kassarin (probably Zarafshan river); to irrigate gardens watermills deliver water from the river to the up. Population of the city gathers after evening prayer and goes to the riverside to have a walk and enjoy. There sitting dais and shops are ready for them, fruit and other dishes are traded. Such great palaces and buildings tower above the river shore; they witness that population of Samarkand possesses great skills.

This country is rich in grains, fruit, poultry and various sorts of meat – virtually everything. Sheep have large lards, very big. There are sheep with heavy lard of twenty pounds weight, which can be hardly to be raised. Such large-larded sheep were so plentiful and cheap that at times when the ruler’s army gathered in Samarkand, a couple of such sheep cost one ducat. Other goods were also so cheap that one and a half fanega of millet cost half a real. Bread and water are free, and rice is abundant everywhere.

There was surprising plentifulness in Samarkand and surrounding lands as well. Due to this wealth, the city is called Samarkand. This name means Simeskent, that is “rich village”. There are suppositions that the name of Samarkand originated with this word.

Wealth of a city is not only in abundance and cheapness of food products. There were lots of fabrics like atlas, velvet, sendal and tersenal, cloths made of fur and silk, cosmetics, parfume, herbs and seasonings, golden and blue dyes and other things. The ruler strived much to augment glory of the city: if he conquered and subordinated a country, he brought people from there and located them in Samarkand and its suburbs.

At numerous Samarkand bazaars one can find fresh or cooked meat, tidily baked bread, various fruit are sold. These bazaars and squares are crowded day and night, trade goes on without a break.”

Polio will be eradicated from Pakistan by end of 2023: Unicef director