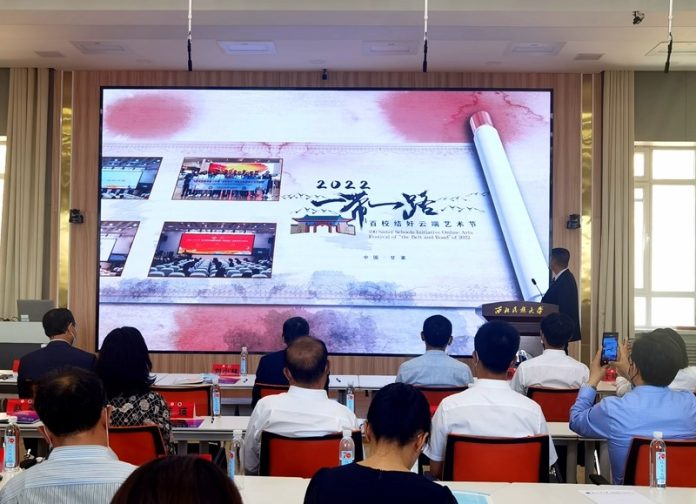 ISLAMABAD, : The 2022 Belt and Road Online Arts Festival was launched both online and offline recently at the Northwest Minzu University, China, providing a platform for Pakistani youth to showcase their talent, China Economic Net (CEN) reported on Wednesday.

To participate in the event, youth in Pakistan and other countries can prepare music or dancing videos and share them on designated channels that will be announced soon. Selected videos will be broadcast on mainstream international and Chinese media platforms.

“The 100 Sister Schools Initiative opens an avenue for people-to-people exchanges by enabling the middle and primary schools in partner countries to connect and communicate with one another”, said Liu Xiaolin, Vice President of Gansu Provincial People’s Association for Friendship with Foreign Countries, on the launching ceremony.

A number of representatives of institutions in the United Kingdom, France, Switzerland, Belgium, Belarus, Chile, Poland, Pakistan, Thailand, Maldives, Uzbekistan, etc. felicitated the launching of the event via video. “I hope Pakistani youth can have a better understanding towards Gansu Province through this event”, said Ma Bin, President of China-Pak Educational Center and Chairman of Overseas Chinese Association of Pakistan in his video message.

“In the previous sessions, we collect drawings or photographic works. Among the over 500 pieces of work from 15 countries, many works from Pakistan were selected as outstanding ones. This time, we expand the forms from graphic arts to videos”, she said.

Gansu Province has been enhancing trade, economic, and agricultural relations with Pakistan. At the end of last year, Lanzhou City, the capital of the province, and Jiuquan City formed sister ties with Quetta and Faisalabad respectively.