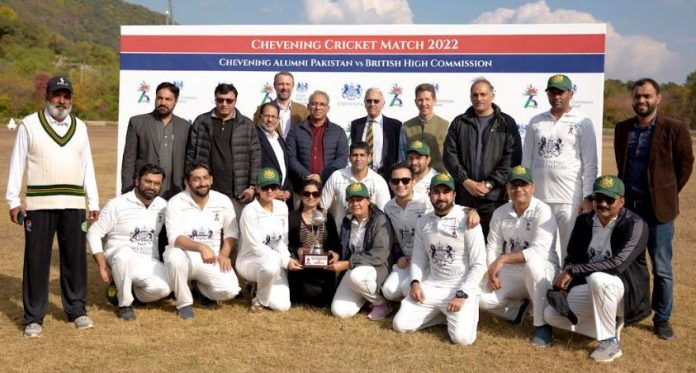 Inspired by the ongoing England vs Pakistan cricket saga and a revival in sports diplomacy, the BHC Staff and former Chevening scholars swapped their daily routine for a limited-over and mixed gender contest of bat and ball at Shalimar Margallah Ground, Islamabad. The Chevening team batted first and set a target of 135 runs to chase. The BHC team chased down the target and won the match by 6 wickets.

This year to mark the 75 year anniversary of UK-Pakistan relations, the UK is awarding 75 Chevening scholarships. Whilst applications for 2023/2024 Chevening Scholarships are now closed, applications for 2024/25 scholarships will open in August 2023 and will be advertised on the Chevening website. All those looking to study for a master’s degree in the UK and who hold an undergraduate degree, are encouraged to apply, and especially women and individuals with disabilities. The UK’s efforts to increase inclusivity in all fields in Pakistan during the past few years have successfully raised the number of women winning Chevening scholarships from 6% to 60%, with students with disabilities also a part of the cohort.

“It was great meeting Chevening Alumni at today’s cricket match and seeing women compete. Sport has a unique way in bringing people together and plays a major role in progressing gender equality by opening up new opportunities and unlocking talent.”

“Educated women leaders are essential to resolve the daunting economic, social and environmental challenges the world faces today. The UK’s efforts to increase gender inclusivity will encourage more women to apply for Chevening Scholarships in future. I believe the Chevening Alumni I have met today and those of the future, will play a vital role in transforming Pakistan’s future as leaders, opinion formers and policymakers.”

From trade to sports to education, UK-Pakistan dosti is stronger than ever. As a Chevening alumna and a successful career woman, I encourage all Pakistani women to apply next year and play their role in promoting gender inclusivity, reducing poverty and developing climate resilience.