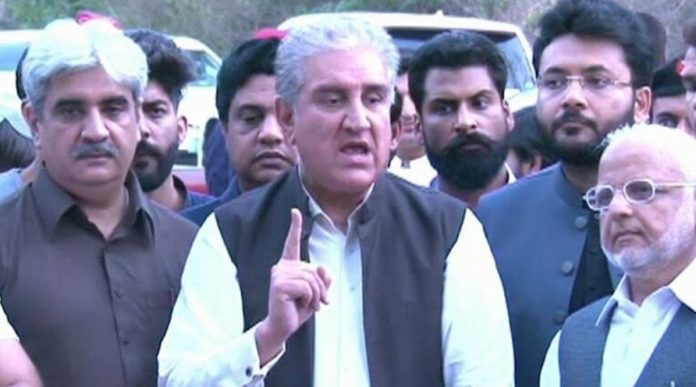 ISLAMABAD: Pakistan Tehreek-e-Insaf (PTI) Vice Chairman Shah Mehmood Qureshi said the nation was expecting that Foreign Minister Bilawal Zardari Bhutto would talk to his Indian counterpart pertaining to the blasphemous and condemnable remarks made against Prophet Muhammad (PBUH) by leaders of India’s ruling Bharatiya Janata Party (BJP).Talking to media, after a delegation level meeting between PTI and Majlis-e-Wahdat-e-Muslimeen here on Monday, Qureshi said that the BJP’s two leaders’ remarks hurt the sentiments of the muslims worldwide and Pakistan should talk up the issue with Indian government vociferously.However, PTI Vice Chairman expressed his surprise over the silence of Pakistan Foreign Office in this regard, as Pakistan should register a strong protest to India. He said that the Organization of Islamic Cooperation (OIC) should also take a clear stand on it and should protest strongly against it so as no one could ever think of committing such a reprehensible act.Qureshi said that Dr. Shereen Mazari and he was representing the PTI delegation and the current situation in the country were discussed in detail. He said that during the meeting, both the sides also discussed strategies for moving forward.Talking about the water crisis, Qureshi said that there was severe water crisis in Sindh, South Punjab and Balochistan; however, the government was oblivious to the looming water crisis. He said that Pakistan People’s Party (PPP) observed a criminal silence over the plight of the people of South Punjab, adding that no one was bothered about problems being faced by the farmers of Sindh.Qureshi went to say that due to unfair distribution of water, the right of South Punjab was being compromised, demanding Punjab Chief Minister Hamza Shahbaz to resolve the issue immediately. “The most valuable crop of South Punjab is mango orchards, which are are ruined because of scarcity of water,” he added.PTI Vice Chairman said that PML-N’s voters were questioning their leadership as to why turncoats were imposed on them, adding that PML-N in connivance with Election Commission of Pakistan (ECP) was planning to rig the by-polls. Qureshi made it clear that the by-election on 20 vacant seats in Punjab were being held for a specific purpose and the people were well-aware of this game.