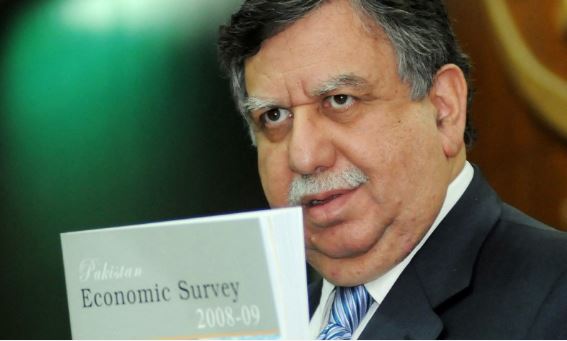 ISLAMABAD:  /DNA/ – Former Finance Minister and Pakistan Tehreek-e-Insaf (PTI) Shaukat Tareen has hinted that the government proposed budget 2022-23 would trigger a storm of inflation and unemployment, as they would get no relief from International Monitory Fund (IMF) despite massively overburdening the inflation-ridden masses.Speaking at a joint press conference with PTI senior leaders Omer Ayub and Muzammil Aslam, Tarin said that Federal Finance Minister Miftah Ismail presented a very confused budget, as he tried to befool the masses through jugglery of words. He said that the government has set unrealistic growth targets in the budget 2022-23 which it would never be able to meet.Tarin said that the budget has a deficit of Rs4.2 trillion and we saw the highest GDP growth in three years.He asked Finance Minister to be serious at least on the economy, as if the debt had been increased, the reality must be told that the economy grew considerably, remittances and exports remained at record levels, adding that the agricultural growth of the imported government would be less than ours, as it would not even touch 3.9 percent.The former finance minister said large scale manufacturing (LSM), housing, services sector, remittances, and exports all witnessed robust growth during PTI’s tenure.Tarin said that the incumbent withdrew the incentives provided to the industries that would cause their closure, which is alarming.PTI senator made it clear that the government would further increase petrol prices, inflation has gone up to 24%, and unemployment would increase further and could soar to 25 to 30 percent. Tarin said the government will impose a petroleum levy of up to Rs35 which would bring another storm of inflation in the country.We think that they should also have increased income tax but now they would present bring fixed income tax,” he added.He said that they have set a target of petroleum levy of Rs 750 billion, which will trigger a storm of inflation, adding that we gave Rs1 trillion worth of subsidies to the power sector.Tarin further said that this year capacity charges will go up to Rs 1,400 billion. I have left 43% of new taxpayers in the data which the government is not using. I think they will have a problem with IMF because a time bomb fined in the budget.Speaking on the occasion, former Federal Minister for Energy and Senior Leader of PTI Omar Ayub said that now the prices of food items will skyrocket, we have left the price of electricity at Rs. 16, but now it will increase to Rs. 39 or 40 per unit, adding that when the power rate would touch Rs. 40 per unit, won’t the people stone them?He said that since the imported government was imposed through a conspiracy, our banking ranking has been on the decline, adding that in June-July, the power shortage will be 7,000 MW.He alarmed that petrol price would soon cross triple century, and could soar past Rs. 300 or 310 per liter.Omer Ayub stated that these people are hell-bent to destroy the businessmen, as the sole agenda of imposing the imported government was to ruin the Pakistan economy, which was thriving first in our time.He alarmed that the fuel prices would exceed Rs300 or 310 per liter in the coming months, adding that it would destroy agricultural and industrial sectors and the inflation would batter down a common man, adding that the Sui gas bill of the people would see 400% rise.Expressing his surprise over the gas load shedding in the summer, he said that industries were going to be shut down, as how will they earn money and how will they pay salaries.PTI Spokesman for Finance and Economy Muzammil Aslam said that interest payments will increase by Rs 1,000 billion in just one year, our remittances have also decreased, adding that this year’s deficit will exceed Rs 7,000 billion. The rate will increase by more than 35%. He that they had already given a mini budget by increasing the price of petrol before the budget.