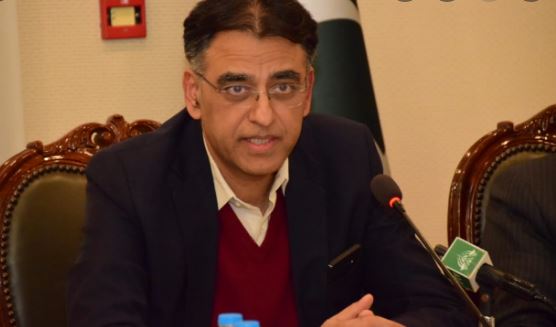 ISLAMABAD, JUN 24 /DNA/ – Lashing out at the government for imposing super tax on large-scale industries, Pakistan Tehreek-e-Insaf (PTI) Central Secretary General Asad Umar said that the government should hold a 14-day mandatory budgetary debate in the Upper House or else the budget would be unconstitutional and could be challenged in the court of law.

Speaking at a press conference here on Friday, he said that the Prime Minister imposed the super tax on large-scale industries, which would prove counter-productive, as such measures would rattle the economy.

He said that imposition of super tax was a huge blow to the growing industries because it was levied on the sectors generating employments; therefore, the new tax would increase problems of rank and file, as it would cause unemployment.

Asad Umar said that Shahbaz Sharif claimed in his speech that the country was going bankrupt; however, he added that Imran Khan’s government had worked hard to increase foreign exchange reserves in three and a half years.

He said that at the end of PML-N government, the foreign exchange reserves were $9. 97 billion in June 2018, which surged by about $7 billion to $16.4 billion by the day the no-confidence motion was tabled to topple the well-performing government, but now they had declined the foreign reserves by half, adding that the PML-N brought the country to the brink of default.

“In our time, the country’s growth rate had reached 6%, it was not bankruptcy, as industries, agriculture, exports and remittances were booming,” he added.

Asad Umar stated that the PML-N presented the real budget today, as the government made the announcement about the tax after 14 days bypassing the Senate in sheer violation of the constitutional rights.

He said that the imported government announced hundreds of billions more in taxes before presenting its recommendations to the Senate.

He said that Shehbaz Sharif made the budget-related announcements outside the National Assembly, which was unprecedented, as he did not have the courage to announce the new taxes on the floor of the house.

“On one side they ask the people to cut expenditure and tea consumption, on the other side they provide relief to themselves and allow crores of rupees for useless work in PM House,” he maintained.

Asad went on to say that first government increased input costs by massive increase in fuel, electricity and gas prices and then increased financing costs with a sharp increase in interest rates, adding that now heavy additional taxation is the third assault on the productive sectors of the economy.

He said that this incompetent corrupt gang increased the price of diesel by Rs 120 and petrol by Rs 84, electricity by 45% and gas by 47%, while prices of flour, pulses, and other items were skyrocketing.

“After imposition of dozens of new taxes, it is being said that if the IMF does not make any new demands, the agreement would be reached,” he added.

Asad Umar said that the incompetent cabinet was clueless and did not understand what to do with Pakistan and the people, as inflation reached 27.8% last week, it was expected to reach above 30%.

He said that as Shahbaz Sharif delivered a speech, the stock market crashed by more than 2000 points.

He said that the cabal of crooks did not come into power through public support that was the reason, they did not bothered about their welfare but to protect their own interests, as it was evident from the amendments in NAB laws to give themselves a clean-chit in billions of corruption cases.