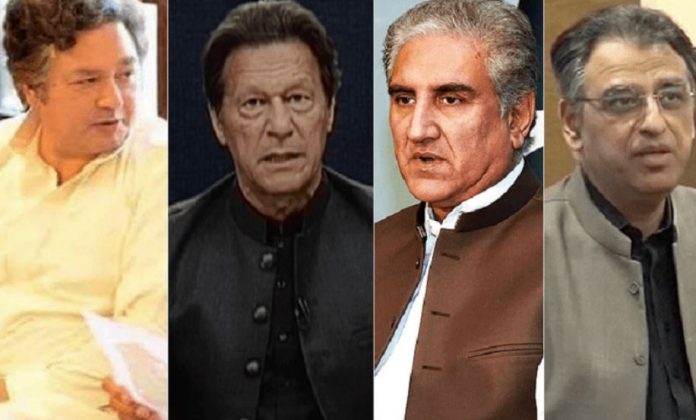 ISLAMABAD, OCT 2: The cabinet has formally given the go-ahead to hold an inquiry into the audio leaks purportedly featuring PTI Chairman Imran Khan and his party leaders, it emerged on Sunday.

On Friday, the cabinet suggested that legal action could be taken after a steady stream of audio recordings surfaced, most recently of informal conversations allegedly between Imran and his aides — Shah Mahmood Qureshi, Asad Umar and his former principal secretary Azam Khan — purportedly discussing the cypher that the PTI chief has for long presented as evidence of a “foreign conspiracy” to oust him from office.

According to Cabinet Division documents dated October 1, which Dawn.com has seen, the Friday meeting had constituted a sub-committee “to deliberate and recommend actions regarding the conversation of the former Prime Minister Imran Khan, his political associates and the then secretary to the PM, available on the internet regarding the cypher message received from Parep Washington (Cypher No. 1-0678 dated March 7, 2022)”.

“Therefore, the apex investigation agency (FIA) may be directed to inquire into the matter by constituting a team of senior officers, which may co-opt officers/officials from other intelligence agencies for the purpose, and to proceed further against the perpetrators in accordance with the law,” the memo said.

The cabinet also sought the implementation report on its suggestions “immediately”.

In a handout issued after the Friday huddle, it was revealed that a copy of the cypher had gone “missing” from the Prime Minister House records, and the cabinet had subsequently formed a special committee which would determine the legal action to be taken against all those involved, including the ex-premier, ex-principal secretary to prime minister Azam Khan and senior ministers.

“The cabinet committee will consist of the representatives of the coalition parties in the government, along with ministers,” the handout issued had said.

The handout had declared that the “theft of diplomatic cypher records is an unforgivable crime” and violation of the Official Secrets Act, 1923.

The cabinet was told that the audios purportedly featuring Imran and his aides exposed “the criminal conspiracy of the former government”, while the cypher was given “fictitious meanings for political mileage and subsequently it was stolen after fraud, forgery, fabrication.”

Meanwhile, PML-N Vice President Maryam Nawaz maintained that the cypher was not just a piece of paper, saying “it belongs to the state of Pakistan.”

“Whoever violates the interests of the state by betraying the national trust should be made an example so that no foreign agent dares to harm the country in a political guise.”

Senior PTI leader Shah Mahmood Qureshi said the cabinet summary has “proved that the cypher is a reality”.

“The government has accepted our stance on the cypher,” he told a gathering in Multan today. Qureshi said his party is not afraid of the investigations announced by the government.

“We never took a step that harmed the interests of Pakistan. We served this country with dignity and will continue doing so,” he insisted.

Fawad Chaudhry pointed out a date of the cypher received to the then government in the summary issued by the cabinet, saying he hoped that PML-N Vice President Maryam Nawaz “will not change her position on cypher investigation from independent commission”. Senator Shibli Faraz also said the cypher is a reality, adding it was also shared by the PTI government with the National Assembly speaker and the chief justice of Pakistan among others.

“What is the discussion about? Is it to divert the attn from tanking economy or smoke screen Dar’s & Maryum NRO?” he asked.

A couple of audios purportedly featuring Imran and his party leaders have surfaced on social media so far, prompting clamours from leaders of the ruling coalition for an action against the ex-premier for allegedly undermining national security.

In the first audio clip leaked on Sep 28, the former prime minister can be heard telling Azam to “play up” the cypher and turn it into a foreign plot to oust his government. He, however, adds that there is no need to name any country. “We only have to play it up. We don’t have to name America. We only have to play with this, that this date [of the no-trust vote] was [decided] before.”

To this end, Azam is heard suggesting to Imran to call a “meeting of then-foreign minister Qureshi and foreign secretary wherein we will ask Qureshi to read out the letter. So whatever he will tell us, I will type it down and convert it into [meeting] minutes” so that it becomes part of the office record.

Later in another audio clip that surfaced on social media on Sep 30, a voice, believed to be Imran’s, was heard saying: “Shah Jee we have to hold a meeting tomorrow […] you and the three of us (Imran, Qureshi and Azam Khan) and the foreign secretary.