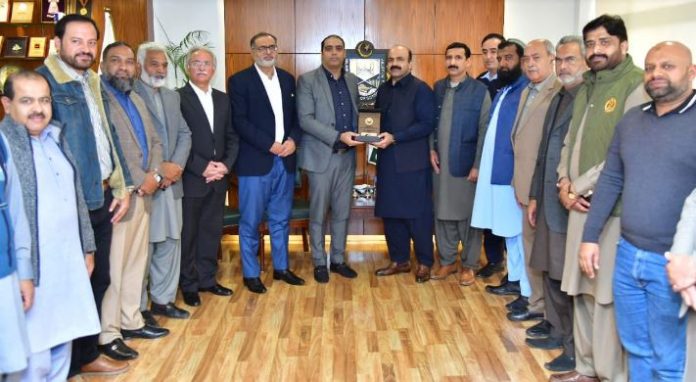 ISLAMABAD, DEC 5 /DNA/ – Faad Waheed, Senior Vice President, the Islamabad Chamber of Commerce & Industry said that the business community is facing great problems due to rising encroachments in markets and stressed that CDA should take urgent measures to address this major issue. He said that before launching operation against encroachments in any market, CDA should take the concerned Trade Association on board to resolve this issue amicably. He said that CDA should make one market as a model example for removal of encroachments. He said that Trade Associations of all markets are ready to cooperate with CDA in this campaign as it is in the interest of traders. He said this while talking to Shahjan Khan, Deputy Director General (Enforcement), CDA during his visit to Islamabad Chamber of Commerce and Industry (ICCI).

Speaking at the occasion, Shahjahan Khan, Deputy Director General (Enforcement), CDA assured that he would take Trade Associations of concerned markets on board to remove the encroachments as their removal would be beneficial for the traders and revive the beauty of the federal capital. He said that the Capital city is the face of Pakistan, but rising encroachments are creating problems for the business community and affecting the beauty of the city. He said that CDA has already done the survey of many markets to identify the violations as the civic body has adopted a zero-tolerance policy against encroachments and added that representatives of Market Associations should share their contact numbers with Enforcement Directorate so that they could be taken on board to address this major issue in markets. He said that three types of encroachments including pushcarts by outsiders in markets, violations by shopkeepers and constructions would be addressed by taking stakeholders on board. He said that efforts are being made to remove the pushcarts set up under Ahsaas Program from markets to a separate location. He said that CDA is working on a plan to remove all showrooms from markets to move them to suitable locations as these are creating nuance in the markets. He said that CDA has adopted the policy of publishing advertisements in print media and a campaign on electronic media would also be run on various issues including removal of encroachments.