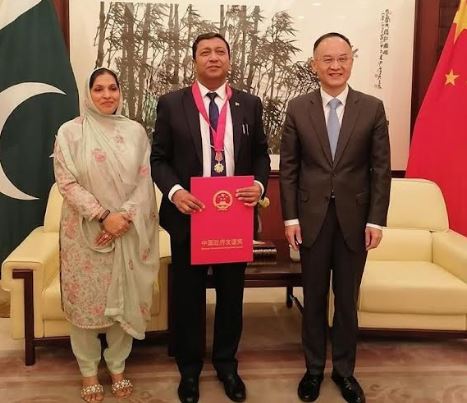 ISLAMABAD, DEC 5 /DNA/ – Prof. Dr. M. Iqbal Choudhary, Coordinator General COMSTECH/ Director ICCBS honored by the government of China with the Chinese Government’s Friendship Award. The award was presented by His Excellency Mr. Nong Rong, Ambassador of the People’s Republic of China in Pakistan in a special ceremony held at the Chinese Embassy in Islamabad.

Chinese Government’s Friendship Award is the People’s Republic of China’s highest award for “foreign experts who have made outstanding contributions to the country’s economic and social progress”. The winners of this award have been selected by the State Administration of Foreign Experts Affairs (SAFEA) under the State Council. The award is conferred as part of the celebrations for the National Day of the People’s Republic of China on October 1 and it consists upon a medal and an award certificate.

Prof. Choudhary has played a key China-Pakistan cooperation in the field of science and technology, including establishment of Sino-Pakistan centers in various fields. This includes the national institute of virology at the PCMD, in collaboration of Wuhan Institute of Virology China.

Prof. Dr. Muhammad Iqbal Choudhary is a world renowned medicinal chemist. He has published 1,175 research papers in the fields of organic and bioorganic chemistry in international journals, 76 books and 40 chapters in books published by major US and European press. He has secured 40 US patents so far.

Prof. Choudhary’s work has been cited by the researchers from around the world over 30,000 times and his h-index is 80. By now 94 national and international scholars have completed their PhD degrees under his supervision.

Prof. Choudhary is D.Sc., Ph.D., and C. Chem. He has been awarded by different governments of Pakistan with Hilal-e-Imtiaz, Sitara-e-Imtiaz, and Tamgha-e-Imtiaz.

Prof. Choudhary has been honored by the President of Iran with Khwarizmi International Award, President of Azerbaijan, with ECO Award in Education and the Prime Minister of Pakistan with COMSTECH Award in Chemistry. He is Mustafa (PBUH) Prize Laureate. He has been given the prestigious title of “Distinguished National Professor” by the Higher Education Commission in 2004 and Meritorious Professor by the University of Karachi in 2013.