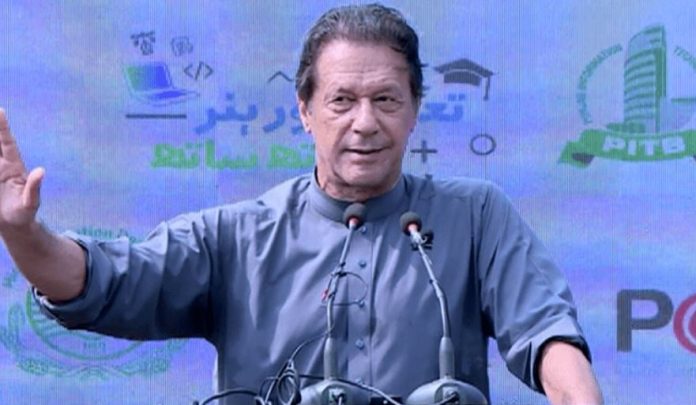 Addressing a gathering at Government College University (GCU) in Lahore, Imran said the audio leaks had made it apparent that CEC Raja was a “servant of the Sharif household”.

In the audio leaks, “Nawaz is telling him [CEC] who should be disqualified and when to hold elections,” the former premier said.

After the audio leaks, the CEC should resign if he has even an ounce of shame, he said. “But he doesn’t [have any shame], so we will have to make him resign.”

PML-N leader Talal Chaudhry on Sunday had said the government was taking the leaks “very seriously”, however, he stopped short of denying the veracity of the audios.

The content of the recordings, which appear to be informal conversations in the PM Office — as opposed to recorded phone conversations — has not been denied or disputed by Information Minister Marriyum Aurangzeb, who instead insisted that these only showed that “nothing illegal had happened”.

In his speech, Imran also alleged that the CEC had blocked the use of electronic voting machines (EVMs) on the instructions of PML-N supremo Nawaz Sharif and PPP co-chairperson Asif Ali Zardari.

“I kept on trying to introduce EVMs for three years […] But this man, on the instructions of Nawaz and Zardari, who rely on false votes, did not allow EVMs,” he claimed.

Turning his guns on Maryam, the PTI chief referred to one of the audio recordings purportedly featuring a conversation between PM Shehbaz and an unidentified official about the possibility of facilitating the import of Indian machinery for a power project that was linked to the PML-N vice president’s son-in-law.

“There are still no ties, but Maryam’s son-in-law [intends] to procure machinery from India,” Imran continued, adding: “And what is prime minister cherry blossom’s response? He suggests that they bring the machinery via another country instead of telling them not to import it at all.”

He further claimed that PM Shehbaz had also assured Maryam’s son-in-law that he would not face any obstacles in constructing a grid station worth Rs700 million at one of his housing societies.

He was told that the grid station would be “financed by money from the Pakistani taxpayers”, the PTI chief claimed.

He continued that in the coming days, there would be more “episodes” in audio leaks saga.

“I am hearing that a [recording] will surface where Maryam will tell abba jee [Nawaz] that the election commission has said they will disqualify Imran Khan in the Toshakhana case and that there is no need to worry,” he said.

“This is the [state of the] election commission.”

Responding to Imran’s comments, Maryam said that strict action should be taken against the GCU vice chancellor for “desecrating an educational institution by lending it to a fitna and organising his jalsa on the premises”.

“Using a seat of learning for political hate-mongering is a crime that should not go unpunished,” she said.