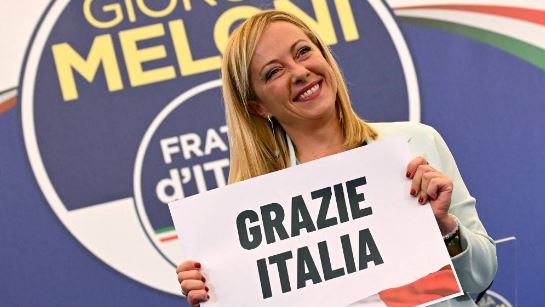 ROME, SEP 26: Italy took a sharp turn to the right Monday after Giorgia Meloni’s Eurosceptic populist party swept to victory in general elections, putting a one-time Mussolini admirer on course to become the first woman to lead the country.

Meloni’s Brothers of Italy party, which has neo-fascist roots, won 26 percent in Sunday’s election, according to partial results.

It leads a coalition set to win a majority in parliament and install the most right-wing government since World War II.

Her success represents a seismic change in Italy — a founding member of the European Union and the eurozone’s third largest economy — and for the EU, just weeks after the far-right outperformed in elections in Sweden.

“It is the first time in decades that the country’s political face has transformed so completely. We don’t know yet whether its destiny in Europe has changed too, but that is the first of many questions” now facing Italians, he said.

Meloni, who campaigned on a motto of “God, country and family”, is expected to become Italy’s first woman prime minister, although the process of forming a new government could take weeks.

At a time of soaring inflation, a looming energy crisis and the war in Ukraine, the 45-year-old sought to reassure those worried about her lack of experience and radical past.

Meloni said voters had sent a “clear message” of support for her party to lead their right-wing coalition to power.

“If we are called to govern this nation we will do it for all Italians. We will do it with the aim of uniting people, of enhancing what unites them rather than what divides them,” she told reporters.

Her coalition allies, Matteo Salvini’s far-right League and former premier Silvio Berlusconi’s Forza Italia, lagged behind her in the polls.

But all together they were forecast to win around 44 percent, enough to secure a majority in both houses of parliament.

Full results are not due until later Monday but the centre-left Democratic Party, the coalition’s main rivals, conceded, saying it was a “sad” day.

Turnout fell to a historic low of around 64 percent, about nine points lower than the last elections in 2018.