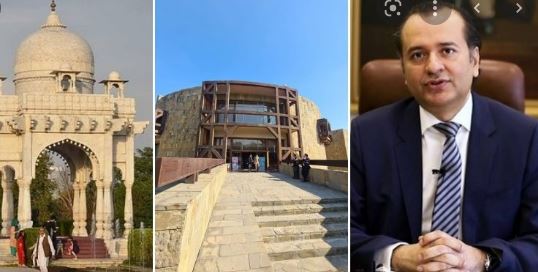 ISLAMABAD, FEB 6 /DNA/ – Chairman Capital Development Authority Amir Ali Ahmed inaugurated an art gallery located at F-9 Park, Islamabad. The opening ceremony was attended by renowned artists of the country as well as the general public.
Addressing the participants at the inauguration ceremony, the CDA Chairman said that a year ago it was not possible to visit this F-9 Park in the evening however due to the tireless work of the present CDA administration especially the Environment Directorate. The park has now been restored and efforts are underway to further improve it.  Chairman CDA said that CDA is carrying out various development works in Islamabad including various highways, street lights, various parks. However, no city can only be decorated with streets, parks or street lights but it should have its own civilizations and lifestyles have separate identities and no society can achieve its status without cultural identities.
He further said that Islamabad is a beautiful city as well as has a distinct and unique identity in terms of culture and civilization.
Addressing the participants of the function, Chairman CDA Amer Ali Ahmed said that gathering of all of us here today is an attempt in this regard. Art and culture can be officially encouraged, but our artist community has a more important role to play in highlighting it, and it is in this spirit that the building has been renovated to promote art and culture. Sometimes ago, this building was very dilapidated, but today, by the grace of Allah, after the completion of the renovation work of this building, its condition and original shape is in front of everyone. He added that a proposal was also made to turn the building into a restaurant but there was plenty of space for the restaurant. Therefore, it was decided that there is a capacity for an art gallery in the city of Islamabad and  Islamabad needs it, so an art gallery should be set up in this building. He also said that this art gallery will run Pakistani artists and Capital Development Authority will give them full support.
Later, the Chairman CDA thanked all the participants for attending the event and said that in the light of your guidance and suggestions, the Authority would continue to take further such steps. The CDA chairman also saw an exhibition of art gallery art.