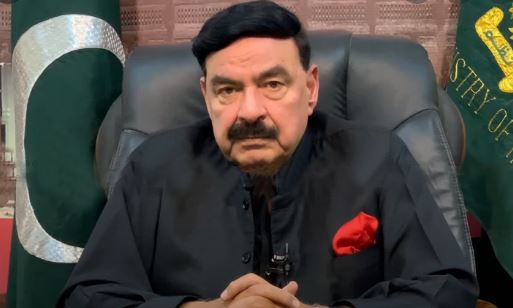 ISLAMABAD, FEB 06 (DNA) — Expressing ignorance about any talks taking place between Pakistan and the Tehrik-i-Taliban Pakistan (TTP), Interior Minister Sheikh Rasheed on Sunday said on the contrary the country’s security forces had eliminated 20 terrorists during the last 72 hours.

Addressing a press conference in Islamabad, the Interior Minister said he would go to Balochistan after the cabinet’s meeting to pay tributes to those personnel of the law-enforcement agencies who had laid down their lives while against the terrorists. He further said that Pakistan’s relations with the Taliban government in Afghanistan were cordial, and it was the government’s desire that situation in the country improved further.

Commenting on recent moves made by the opposition parties, particularly by the Pakistan Muslim League-Nawaz (PML-N) and Pakistan Peoples Party (PPP) leaders yesterday (Saturday) at a lunch at PML-N President Shehbaz Sharif’s Model Town residence in Lahore, he said these very parties, which often indulged in blame game against each other, were now going to unite against the government only for their self-interest. “Otherwise, they do not have any sympathy for the masses,” he added.

Rasheed was of the opinion that Jamiat Ulema-e-Islam-Fazl (JUI-F) chief Maulana Fazlur Rehman should bear this thing in mind that both PPP and PML-N had ditched him as he was not invited to Saturday’s lunch in Lahore.

Wondering over the brand of politics practiced by the opposition parties, the minister said earlier they were talking about resigning from the assemblies en masse, then there was a talk of marching on Islamabad.

“I think they are going to create lot of problems for themselves,” Rasheed said, adding if those who had laundered the country’s money abroad wanted to come to Islamabad, they were most welcome. “We are not afraid of them,” he stated categorically.

He dared the opposition to throw the government out of the corridors of power if they had the capability to do so. He said he had never called former president Asif Ali Zardari Mr. 10 per cent or Bilawal ‘selected’.

Interior minister informed that his Saudi Arabian counterpart was reaching Islamabad tomorrow (Monday, February 7, 2022). “I will take up with him the issue of release of Pakistanis from Saudi jails,” he told media. =DNA