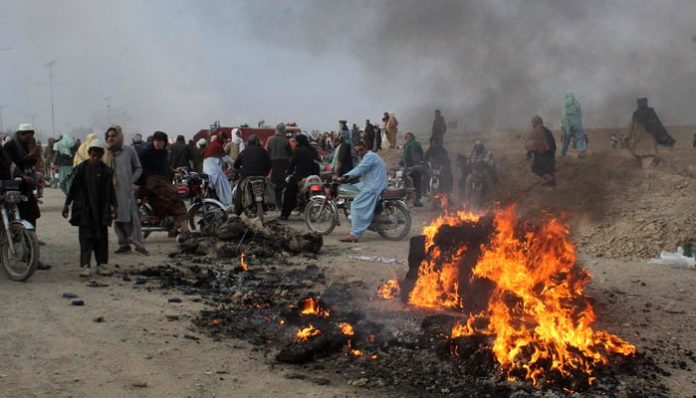 Prime Minister Shehbaz Sharif Monday termed the Chaman incident as “unfortunate” and asked the Afghanistan government to “ensure that such incidents are not repeated.”

“Unprovoked shelling and fire by Afghan Border Forces at Chaman resulting in the martyrdom of several Pakistani citizens and injuring more than a dozen is unfortunate and deserves the strongest condemnation,” the prime minister said after the Foreign Office demanded the “strictest possible action” against those behind it.

The premier also asked the Taliban government to ensure that such incidents are not repeated.

Earlier, the FO condemned the “unprovoked and indiscriminate firing” on the civilian population by the Afghan forces in which six Pakistani nationals embraced martyrdom and 17 others sustained injuries on Sunday.

In a press release, Foreign Office Spokesperson Mumtaz Zahra Baloch said such unfortunate incidents are “not in keeping” with the brotherly ties between the two countries.

She said the Afghan authorities have been informed that the recurrence of such incidents must be avoided and the strictest possible action must be taken against those responsible.

The spokesperson said it is the responsibility of both sides to protect civilians along the border.

The FO spokesperson said the concerned authorities of both countries remain in contact to ensure that there is no further escalation of the situation and recurrence of such incidents is avoided.

Using heavy weapons, the Afghan border forces opened unprovoked and indiscriminate fire at the civilian area in Balochistan’s Chaman city resulting in the martyrdom of six people and injuries to 17 others, a statement issued by the Inter-Services Public Relations (ISPR) said.

According to the military’s media wing, the Afghan border forces used artillery and mortar in the attack.

The ISPR said that Pakistan’s troops at the border gave a befitting albeit measured response against the uncalled-for aggression, but avoided targeting innocent civilians in the area.

The statement added the Pakistani border forces have also approached Afghan authorities in Kabul to highlight the severity of the situation and demanded strict action to avoid any such recurrence of the incident in future.

However, a Pakistani security guard Sepoy Israr Mohammad had been critically injured in the attack while protecting Nizamani, the Foreign Office said.

It said that Pakistan’s government strongly condemns the assassination attempt and attack on the embassy demanding the Afghan government conduct an immediate investigation into the incident.

Last month, a Frontier Corps soldier embraced martyrdom and two more sustained injuries in the midst of a cross-border attack from neighbouring Afghanistan to the Chaman district.

Afghan security officials allegedly opened fire on the FC personnel while they were deployed on duty on the Pakistani side of the Bab-e-Dosti near Chaman, as per Levies officials. Following the incident, the Pakistani authorities contacted the Afghan government for a ceasefire in the area.

During her visit, Khar discussed matters of bilateral importance with Amir Khan Mutaqqi focusing on political consultations between the two governments.

“A range of bilateral issues of common interest including cooperation in education, health, trade and investment, regional connectivity, people-to-people contacts, and socioeconomic projects were discussed.”