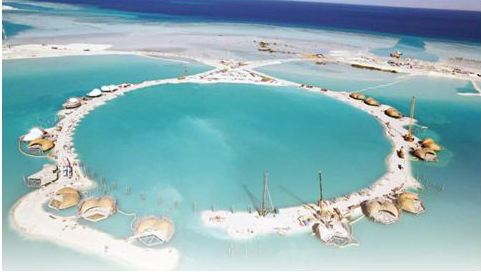 By Yan Huan, Shen Xiaoxiao, Zhou Zhou, People’s Daily As China and Saudi Arabia synergized their Belt and Road Initiative and Saudi Vision 2030 over the recent years, the two countries’ cooperation in energy, technology and infrastructure sectors have been gradually deepened and achieved constant outcomes. The Yanbu Aramco Sinopec Refining Company in Yanbu, which sits on the west coast of Saudi Arabia, is a joint venture between Saudi Arabia’s oil giant Aramco and China’s largest oil refiner Sinopec. Covering an area of about 5.2 million square meters, the refinery boasts total investment of over $8 billion. It is the largest Chinese investment project in Saudi Arabia. The oil refinery has maintained sound operation since it was put into use. With a designed refining capacity of 400,000 barrels per day, its products are sold to Europe and the Asia-Pacific region. Its profit between January and October this year set a record high since its operation. China and Saudi Arabia have made good use of their respective strength and cooperated well in this project. The Yanbu Aramco Sinopec Refining Company has received a series of international awards in engineering construction and operation and management. Apart from the economic benefits, the oil refinery is also a great platform for the career development of local young employees. A 32-year-old engineer surnamed Hussein works for the refinery’s coking workshop. He came to the oil refinery in 2015 after graduating from University. The workshop is the first coking facility introduced to Saudi Arabia, so the job was quite difficult for Hussein at first. Thanks to the assistance offered by Chinese engineers and the man’s hard work, Hussein gradually acquired the skills needed for the job. Now, Hussein has been promoted to supervisor and became friends of the Chinese engineers. At present, the oil refinery has over 1,200 employees from Saudi Arabia, who account for 87 percent of its total staff. Since its operation, the oil refinery has provided, directly and indirectly, more than 6,000 jobs for local communities. Besides, it has nurtured a batch of local managing personnel and technical workers through training and continuing education programs it launched, injecting momentum into the economic and social development of local communities. Saudi Arabia is hot and dry. Domestic water is extremely precious in the country. Therefore, the fresh water desalinized from seawater is an important supplement to Saudi Arabia’s regular water resources. In March this year, the Saudi Arabia Rabigh Phase III seawater desalination plant was put into use. It was built by SEPCOIII Electric Power Construction Co., Ltd., a subsidiary of the Power Construction Corporation of China. It is the first major seawater desalination plant constructed by a Chinese firm overseas. As an important livelihood project of Saudi Arabia, the plant produces 600,000 cubic meters of water on a daily basis and is able to supply domestic water for over 2 million households in major cities around it, including Rabigh and Mecca. “Before the plant was built, domestic water always ran out,” said a local resident surnamed Abdullah in Rabigh. People had to purchase water from supermarkets whenever their domestic water was used up, Abdullah added. Now, with the seawater desalination plant, clear water is always available. “Thank Chinese enterprises for eliminating our worries about domestic water shortage,” Abdullah said. Khaled Al Qureshi, CEO of Saudi Water Partnership Company, the owner of the plant, spoke highly of the Chinese constructors that built the plant. He said these constructors, who still maintained rapid progress, safety and good management of the project despite the impacts from COVID-19, have set an example for other projects of Saudi Water Partnership Company. The Yanbu Aramco Sinopec Refining Company and the Saudi Arabia Rabigh Phase III seawater desalination plant are a miniature of China assisting Saudi Arabia’s economic upgrade and lifting the latter’s livelihood. China isSaudi Arabia’s largest trading partner, and Saudi Arabia is China’s important energy supplying country and largest trading partner in West Asia and North Africa. The two sides reported bilateral trade volume of $87.31 billion last year, up 30.1 percent year on year. Saudi Minister of Investment Khalid bin Abdulaziz Al-Falih said under the guidance of the leaders of China and Saudi Arabia, the two countries’ economic and trade cooperation embraced prosperous development, with increasing mutual investment and accelerated releasing of cooperation potential in green and low-carbon development. China has become the most reliable partner of Saudi Arabia in the latter’s pursuit of the Saudi Vision 2030, he added.