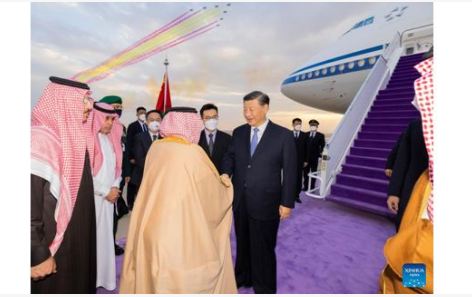 Chinese President Xi Jinping paid a state visit to Saudi Arabia on Dec. 8, and will attend the first China-Arab States Summit and the China-Gulf Cooperation Council (GCC) Summit on Dec. 9 in Riyadh upon invitation.

Xi and leaders from Arab states are expected to jointly lay out the blueprint for future cooperation, usher in a bright future of China-Arab strategic partnership, chart the course for building a China-Arab community with a shared future in the new era, and inject confidence and impetus in promoting world peace and development.

Xi will attend the inaugural China-Arab States Summit. This will be the largest and highest-level diplomatic event between China and the Arab world since the founding of the People’s Republic of China as well as an epoch-making milestone in the history of China-Arab relations.

China and Arab states are important members of the developing world and important political forces in the international community. China has all along viewed Arab states as strategic partners  in terms of pursuing peaceful development, further cooperation with developing countries and building a community with a shared future for mankind.

Over the recent years, the two sides have gradually consolidated political mutual trust and reaped fruitful results in practical cooperation in various fields. They have made constant achievements in the high-quality development of the Belt and Road Initiative (BRI).

They firmly support each other in safeguarding their core interests and join hands to safeguard the basic norms governing international relations.

Changes unseen in a century are accelerating. The world has entered a new phase of turbulence and transformation. To hold the first China-Arab States Summit is a joint strategic decision of both sides to strengthen solidarity and coordination under the current circumstances. China and Arab states will send a strong message about their determination to strengthen solidarity and coordination, render each other firm support, promote common development and defend multilateralism.

The first gathering of leaders from China and GCC countries will have a profound influence on the development of China-GCC relations.

The GCC is one of the world’s most dynamic regional organizations. It plays a positive role in the region and even the world.

China and GCC countries are good brothers, friends and partners that enjoy a high degree of political mutual trust, solid economic and trade cooperation and frequent people-to-people exchanges. Their relations, which are healthy, stable, and comprehensively developed, have become a front-runner in China’s relations with Arab states and set a good example for cooperation between China and developing countries.

China has maintained the largest trading partner of the GCC. Last year, two-way trade bucked the trend and surged 44 percent. Lifting their relations onto a new level, the two sides should cope with the turbulent international situation with their stable relations and promote regional prosperity with their mutually beneficial cooperation.

This trip was Xi’s second visit to Saudi Arabia in six years. It elevated the China-Saudi Arabia comprehensive strategic partnership to a higher level.

China and Saudi Arabia are good friends, partners and brothers that enjoy mutual trust, win-win cooperation and common development. China attaches great importance to the development of China-Saudi Arabia relations and puts Saudi Arabia at a priority position in China’s overall diplomacy, its diplomacy with the Middle East region in particular.

Given the profound and complicated changes in the international and regional situations, the strategic and overarching importance of China-Saudi Arabia relations has become more evident.

China will continue to promote the synergy between the BRI and Saudi Arabia’s Vision 2030 and forge a high-level cooperation pattern between the two countries in such fields as energy, economy and trade as well as high technology, enhance coordination in international and regional affairs, and constantly enrich the connotation of the China-Saudi Arabia comprehensive strategic partnership.

Security and development have long been two major issues for countries in the Middle East. China has always adhered to the principle of non-interference in internal affairs of sovereign countries in dealing with Middle East affairs, and remained an important constructive force promoting peace in the region and supporting the development of the region.

At the opening ceremony of the eighth ministerial meeting of the China-Arab States Cooperation Forum, Xi proposed the two sides to together pursue common, comprehensive, cooperative and sustainable security, which has offered an important method to tackle the security dilemma in the Middle East.

The China-proposed Global Security Initiative is of great significance for promoting peace and stability in the Middle East. It has been widely recognized and supported by Arab states.

The Global Development Initiative (GDI), which is also proposed by China, has been supported by 17 Arab states, and 12 have joined the Group of Friends of the GDI.

Chin will work with Arab states to implement the GDI, help the latter improve livelihood and their capability of independent development, and assist Arab countries in achieving the goals of the UN 2030 Agenda for Sustainable Development. China and Arab states are actively exploring a governance path for the Middle East that promotes peace through development, which will help the region achieve long-term peace and stability.

Under new historical conditions, China and Arab states need to reinforce cooperation, tide over difficulties and march forward together more than ever.

Taking the visit as a new starting point, China will definitely work with Arab states to further carry forward their traditional friendship, deepen their all-round, multi-level and wide-ranging cooperation, and build a China-Arab community with a shared future in the new era, so as to benefit the people of both sides, promote solidarity and cooperation among developing countries, and jointly safeguard international peace and development.