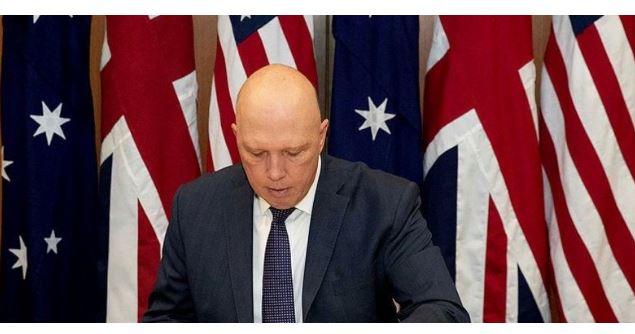 China‘s “alarming” actions do not match its rhetoric about promoting peace and prosperity in the region, Australia‘s defence minister said on Friday after a Chinese navy ship was tracked sailing through the country’s exclusive economic zone.

Defence Minister Peter Dutton listed China’s militarisation of the South China Sea, recent aggression towards Taiwan and the introduction of a national security law in Hong Kong as examples of China’s actions being at odds with its rhetoric.

“We’re all familiar with the frequent claims of the Chinese government that it is committed to peace, cooperation and development,” Dutton said in a speech in Canberra.

“And yet we bear witness to a significant disconnect between the words and the actions. We’ve watched very closely as the Chinese government has engaged in increasingly alarming activities.”

The Chinese embassy in Canberra said Dutton had distorted China’s foreign policy, misled the Australian people and was “fanning conflict and division between peoples and nations”.

“It is inconceivable that China-Australia relationship will take on a good momentum… if the Australian government bases its national strategy on such visionless analysis and outdated mentality,” it said in a statement.

Relations between Australia and its biggest export market reached a low in 2020 when Canberra backed a United Nations inquiry into the origins of COVID-19, which was first recorded in China.

The latest exchange of barbs came as Australia confirmed it had monitored a Chinese intelligence ship sailing in August inside Australia’s exclusive economic zone but not in Australian territorial waters.

Prime Minister Scott Morrison said the ship – the second of its type monitored off the Australian coast in as many months – was travelling legally.

“But don’t think for a second that we weren’t keeping our eye on them, as they were seeking to keep an eye on us,” Morrison told reporters in Adelaide.

“What it demonstrates is now no one can be complacent about the situation in the Indo-Pacific.”

In September, a new security pact between Australia, the United States and Britain, dubbed AUKUS, was widely viewed as an attempt to shore up regional military muscle in the face of China’s growing presence. China called AUKUS a danger to world peace.