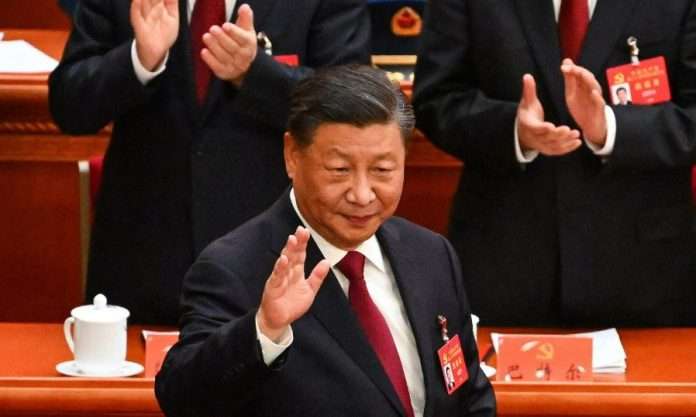 Xi, 69, is poised to clinch a third five-year leadership term as party general secretary, breaking with precedent and solidifying his place as China’s most powerful ruler since Mao Zedong, the founding leader of the People’s Republic of China.

The new leadership will be unveiled at around noon (9am PKT) on Sunday when Xi walks into a room of journalists at the Great Hall of the People, followed by the other members of the new Politburo Standing Committee (PSC) in descending order of rank.

In an unusual moment during the closing ceremony, former President Hu Jintao, seated next to Xi, was escorted off the stage. Looking distressed, Hu, 79, appeared to resist leaving as stewards escorted him out. He had looked slightly unsteady last Sunday when he was assisted onto the same stage.

The party’s new 205-member Central Committee, elected by delegates at the end of the week-long congress, did not include outgoing Premier Li Keqiang or former Guangdong party boss Wang Yang, who had been seen as a potential replacement as premier.

Analysts said their omissions were signs the powerful PSC, to be revealed on Sunday, is likely to be stacked with people close to Xi.

“The main theme of this congress, as seen in the constitutional amendment and the report, is to highlight the core status of Xi,” said Chen Gang, senior research fellow at the East Asian Institute in Singapore.

“With this congress, Xi’s authority grows even more. Going forward, we will see more concentration of power around Xi and around the centre,” he said.

Li and Wang Out

Li, who will step down in March as premier, and Wang, who heads the Chinese People’s Political Consultative Conference, are both 67 and therefore eligible under China’s age norms to serve another five years on the Standing Committee, which currently has seven members.

Neither is seen to have long-standing ties with Xi, who is likely to bring four new faces onto the Standing Committee, according to analysts and media reports.

Li and Wang both have ties with the Communist Youth League, a once-influential group that experts say has lost power under Xi.

The premier is charged with overseeing the world’s second-largest economy, although the influence of the position is widely perceived to have diminished as Xi has steadily consolidated control during his decade in power.

A Beijing-based politics scholar who asked not to be named because he is not authorised to speak with media, said Li had been the lone contrarian voice on the PSC.

“From the looks of it, Xi is free to do anything he wants. It means he no longer faces any resistance or checks and balance in the PSC. All future policies will be carried out according to his will,” the scholar said.

Current PSC members Wang Huning, 67, and Zhao Leji, 65, were both re-elected to the Central Committee and are expected to be reappointed to the Standing Committee.

Two other Standing Committee members are past retirement age.

The party approved amendments to its constitution aimed at cementing the core status of Xi and the guiding role of his political thought within the party, which has about 96 million members.

Among the amendments, the “Two Establishes” define Xi as the “core” leader of the party and his ideas as the guiding principles of China’s future development. The “Two Safeguards” assure Xi’s “core” status within the party and the party’s centralised authority over China.

Another amendment enshrined “developing fighting spirit, strengthening fighting ability” in the party constitution, while a call to oppose and deter separatists seeking independence for Taiwan was also included for the first time.

Voting was conducted by show of hands in Beijing’s vast Great Hall of the People, where much of the week’s proceedings have taken place behind closed doors.

The congress concluded with a military band playing “The Internationale”, a socialist anthem.

At its first plenum on Sunday, the party’s new Central Committee will choose the next Politburo, which is typically 25 people, and its new Standing Committee.

Xi’s power appears undiminished by the events of a tumultuous year, including a sharp economic slowdown, frustration over his zero-COVID policy, and China’s increasing estrangement from the West, exacerbated by his support for Russia’s Vladimir Putin.