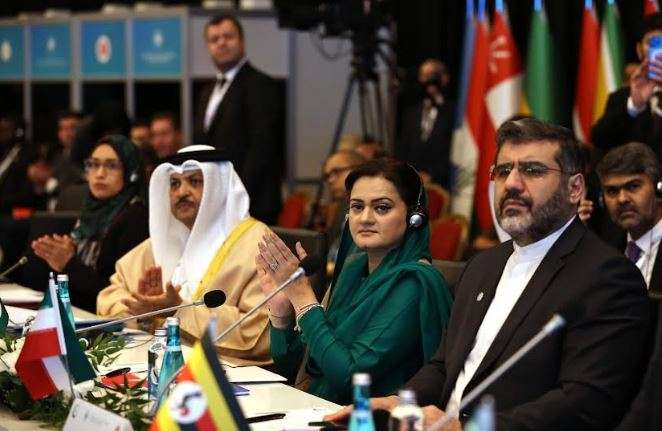 Istanbul, OCT 22 /DNA/ – Federal Minister for Information and Broadcasting, Ms Marriyum Aurangzeb represented Pakistan at the 12th Session of the Islamic Conference of Information Ministers held in Istanbul, Turkiye. The theme of the conference was ‘Combating Disinformation and Islamophobia in the Post Truth Era’.

In her statement, the Minister emphasized on the role of media in addressing the challenges faced by OIC Member states. She stated that climate change is the biggest generational issue of time. Recently Pakistan faced catastrophic unprecedented climate induced floods causing massive loss of life, property and livelihood. Media in OIC member countries has a responsibility to underscore the importance of urgent, diversified and decisive action by the international community to combat climate change and enhance climate financing geared to build resilience, especially in vulnerable developing countries.

Referring to the role of OIC in protecting fundamental rights of Muslims and interests of Muslim minorities, the Minister stated that information colonialism has to be fought and new independent information regime has to be established, as deliberate use of instruments of information control define perceptions about Islam and Muslims. Minister Aurangzeb highlighted that many Muslim countries have independent media and have made inroads into people’s mind about clichéd images of Islamophobia, but more needs to done in terms of creating information synergies among Muslim states.

The Minister paid tribute to the steadfastness of the Kashmiri and Palestinian people and called upon the media in Member States to continue providing maximum coverage to the suffering and brave struggle of the Kashmiri and Palestinian people who continue to face relentless aggression and violations of basic rights at the hands of the Indian and Israeli occupation forces. She added that Pakistan has been consistently leading peace efforts in the region from the front and hopefully Pakistan’s efforts for durable peace and long-term development in the region will be reciprocated.

Speaking on the mechanisms to fight Islamophobia, the Minister suggested to establish strategic partnerships among media organizations in OIC member states, to adopt  Joint Islamic Media Action for propagation of Islamic values like tolerance and rejection of disinformation, institutionalize tangible targets for cultural and media exchange, establish a working group on disinformation and islamophobia in the age of evolving social media and cyber space and also offered to host the first meeting of the Working Group.