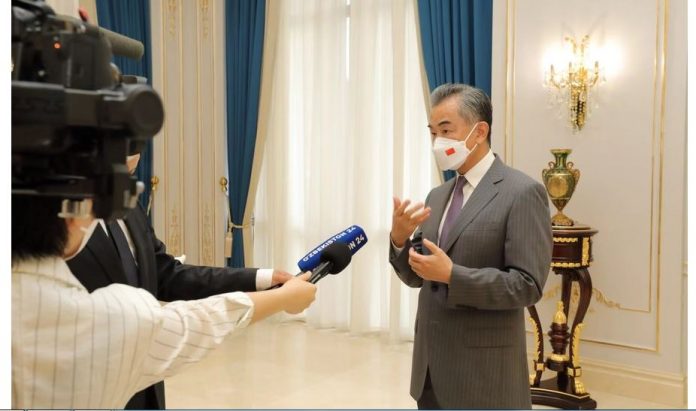 Wang said that faced with the current severe and complex international situation, China and Russia, as two major countries and permanent members of the UN Security Council, should strengthen strategic communication in a timely manner, which will help demonstrate the basic situation of the China-Russia comprehensive strategic partnership of coordination, promote the sound and steady development of bilateral relations, uphold and practice true multilateralism, and push forward the development of the international order in a fair and reasonable direction.

China stands ready to strengthen solidarity and cooperation with all member states of the SCO, including Russia, to make the organization a backbone for defending international fairness and justice, a stabilizing factor for regional and world peace, and an important engine for global post-pandemic recovery, he added.

Noting that time reveals a person’s heart, Lavrov said Russia-China relations have withstood the test of the international situation, which fully demonstrates the traditional friendship and mutual strategic trust between the two countries.

The two sides should continue to strengthen coordination in multilateral affairs, support the central role of the UN in international affairs, maintain the international order based on international law, and support developing countries in adhering to independence, said Lavrov.

Noting that the SCO brings together major food, energy producing and consuming countries, the two sides said they believe that SCO member states need to strengthen coordination, gather consensus, and jointly play a constructive role in addressing the challenges of global food and energy security.

Both sides agreed to deepen the synergy between the Belt and Road Initiative and the Eurasian Economic Union to promote regional connectivity and common development.