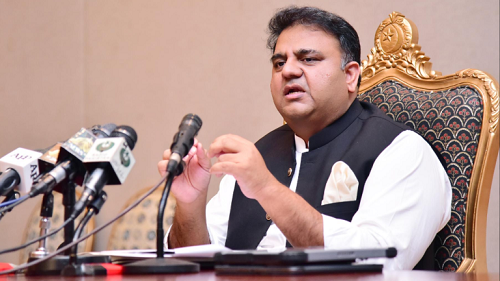 ISLAMABAD: Pakistan Tehreek-e-Insaf (PTI) Senior Vice President Fawad lashed out at the Election Commission of Pakistan (ECP) for postponing scheduled by-polls just few days ahead of the election date on lame excuse of floods, adding that the decisions were being made in closed-room, which he said have neither quality nor durability.
Addressing a press conference here on Sunday, Fawad stated that it was strange that Shahbaz Sharif was sworn in as a prime minister of Pakistan, the day he was to be charged in the Rs. 24 billion corruption case, which has not been framed for last nine months.
He said that the Ramzan Sugar Mill case has not been heard for the last two years, and now NAB pleaded that the law was amended; hence it now did not fall under its jurisdiction. However, Fawad stated that they could not comment anything because it might be contempt of court.
Fawad said that the closed-room decisions have neither quality nor durability; hence interest of the country lies in the decisions made by the people. So let the people decide, he added.
Talking about massive public participation in solidarity rallies across the country, Fawad Chaudhry said that the millions of people showed solidarity with Imran Khan, which was unprecedented.
About ECP’s decision of postponing by-polls, he said that the flood has been going on for two to three months, the situation was getting worse in front of you, you did not get the idea, and three days ago you are saying that there will be no election.
“Besides being biased, the ECP is also suffering from an administrative crisis and incompetence, be it constituencies or declaring 40 lakh voters dead or now postponing the elections by spending billions of nation’s rupees,” he added.
He made it clear that the PTI would get a landslide victory in the elections and that was why the nation saw how they run away from the elections.
Fawad Chaudhry said that the government was not ready to hold elections, because they knew that the guarantees of Ahsan Iqbal, Khurram Dastgir and Shahbaz Sharif would be forfeited; hence better to delay the scheduled polls.
“Institutions are necessary in the country without them the country cannot run, they want to have close relations with the institutions and want to be on the same page with the institutions, the institutions of Pakistan do not represent the people,” he added.
He urged that the unelected institutions should respect political leadership.
Fawad Chaudhry said that it is important to maintain institutional balance in the country, final decisions should be made by people instead of closed rooms, decisions made in closed rooms have no quality.
“Miftah Ismail has made 22 million people cry for many months and yesterday tears are also in his eyes but these tears are given by you,” Fawad told Miftah.
He said that the Prime Minister and the Finance Minister never held a single press conference till date for the interest of the people but they just kept blaming PTI for the IMF program.
Fawad Chaudhary stated that the PTI government kept the prices under control despite challenging situation; however, the imported government broke all record of inflation, besides ruining the economy, industries and all other sectors.
“Today Panadol is not available in the country, inflation has reached 45% and no real estate plan has come for 5 months, but the media is so busy that it cannot even discuss inflation,” he added.
Fawad Chaudhary further stated that today the price of petrol and edible oil has reduced in the world, but the people are facing 45% inflation in Pakistan, adding that during PTI era, petrol in the world market was $105 per barrel, today it is $83 per barrel but they increased the price of petrol by Rs 85 per liter. Edible oil was $1700 in our time and now $800 but did not give relief to the masses. He said that during PTI government, power per unit rate was Rs. 16-18, which surpassed over 36 per unit today.
“We are suffering from isolation at present, our friendly countries helped us in the past, today not a single friendly country has reached out to help Pakistan, because no one has faith in Shahbaz Sharif and his cabinet due to which no one is ready to give money at this time,” he added.
He said that today Imran Khan was going to hold a second telethon, as Rs. 3 billion out of Rs. 5 billion have been collected of which Rs. 1 billion would be used for the flood victims in Sindh, adding that this money has submitted in the banks of Punjab and Khyber Pakhtunkhwa. “Today there is a meeting in which we will decide how to spend this money,” he added.