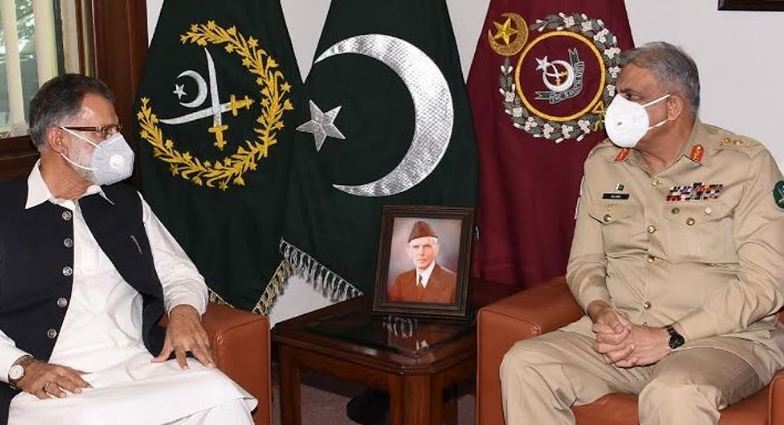 According to a press release issued by the military’s media wing Inter
Services Public Relations (ISPR), both discussed unilateral steps being
taken by India in the held territory and the situation along the Line of
Control (LoC).

Paying rich tributes to the late Hurriyet leader Syed Ali Shah Geelani,
the army chief said that he struggled for the right of
self-determination of the Kashmiris all his life selflessly.

General Bajwa also felicitated Sardar Niazi on taking office as AJK
prime minister and expressed his best wishes for the stability of the
state of Kashmir.

Prime Minister Niazi, on the other hand, praised Pakistan Army for its
role in the provision of security and development of the Azad Jammu and
Kashmir.

General Bajwa assured the AJK prime minister that the Pakistan Army
stood by the Kashmiris as firm as a rock, and it would continue to
support them till they achieved their right of self-determination.

According to the Inter-Services Public Relations (ISPR), both the
leaders discussed matters of mutual interest, including defence and
security cooperation along with the current situation in Afghanistan.

The statement further cited that the two dignitaries also took up
cooperation in multiple fields including security cooperation, joint
training and counter-terrorism domain.

General Bajwa reiterated to work for peace and stability in Afghanistan
and he also assured to support the establishment of an inclusive
government in the neighbouring country.

Dominic Raab, during the meeting, said that diplomatic cooperation with
Pakistan will be expanded at all levels. Pakistan played a key role in
the current situation in Afghanistan, he said while commending
Pakistan’s efforts in evacuations from Afghanistan.

Earlier, UK Foreign Secretary called on Prime Minister Imran Khan in the
country’s federal capital. Khan while discussing the current situation
with British dignitary urged to stand in solidarity with the Afghan
people. Khan also cautioned against the role of “spoilers”, both inside
and outside Afghanistan, which could destabilize the situation. He
underlined the importance of a peaceful, secure, and stable Afghanistan
for Pakistan and regional stability. DNA