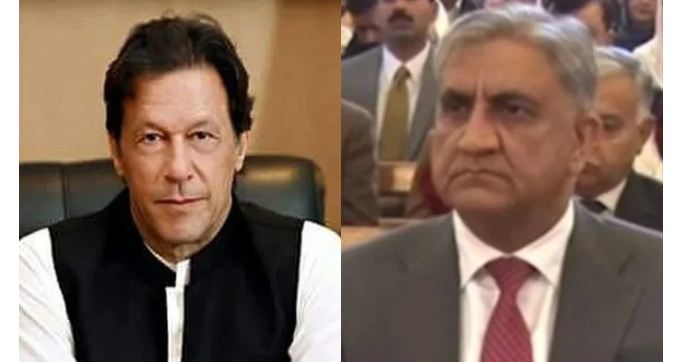 ISLAMABAD: Former army chief Gen (retd) Qamar Javed Bajwa has a lot to tell about Imran Khan, his rise and rise in politics and how he ran his government.

Sources close to General (retd) Bajwa said that the recently retired former Army Chief could not respond in public to what PTI chairman alleges against him because of some codal limitations but it is insisted what Khan mostly says about Bajwa is untrue.

Gen (retd) Bajwa is now the focused target of Imran Khan who not only sees the former army chief as the sole reason for all his failures in the government but also alleges that the general had removed his government as part of a US conspiracy.

While Imran Khan says it was General (retd) Bajwa who was controlling NAB and deciding the arrest and release of politicians, the other side insists that Khan during his premiership was paranoid towards his opposition and wanted to see all his key opponents behind the bars.

These sources said when General (retd) Bajwa will speak, he would have no different tale to tell than what the former DG FIA Bashir Memon had alleged about the-then prime minister Imran Khan.

Like Bashir Memon, who had alleged to have been pressurised by the-then prime minister to arrest his opponents, according to the sources the former premier had also been asking General (retd) Bajwa to get a number of the-then opposition politicians arrested.

The sources said that when Gen (retd) Bajwa said how he could do it, Khan had referred to General (retd) Musharraf and his fashion of dealing with his political opponents during his rule. On this, Gen (retd) Bajwa had reportedly told Imran that Musharraf was a dictator. Gen (retd) Bajwa told Khan to order him in writing what he desired. Khan, however, did not do it.

On one occasion in the presence of several PTI ministers, the sources close to the retired general said, the former army chief reportedly warned Imran Khan against his wish of fixing all his opponents as well as many of his own party leaders. These sources, however, confirm that Gen (retd) Bajwa had been advising the former prime minister to focus on economy instead of his opposition.

During his government, Imran Khan himself has been heard complaining about the fear of NAB and its negative impact on economy and civilian bureaucracy. But his urge to fix the opposition did not let him reform the NAB.

General (retd) Bajwa is mostly blamed for keenly pursuing what is generally referred to as “Imran Khan project.”

It is alleged by Khan’s opponents and many media commentators that the establishment initiated supporting Imran Khan almost a decade back.

PTI’s 2014 sit-in was also alleged to have been a part of the Imran Khan project, which reportedly saw its height in 2017 and 2018. The 2018 elections were considered as massively “managed” and “engineered” in favour of Imran Khan.

During Imran Khan’s tenure, the establishment supported him like never before and being the prime minister, Khan repeatedly admitted it and used to praise Gen (retd)  Bajwa as the best-ever army chief.

Khan gave three years extension to Gen (retd) Bajwa, had offered another extension in March this year to save his government and later even suggested in October 2022 to let Gen (retd) Bajwa continue till the holding of next general elections and formation of a new elected government.

Gen (retd) Bajwa, shortly before his retirement, admitted that the establishment had made mistakes in the past. He had disclosed that as an institution, the army decided in February 2021 to get apolitical.