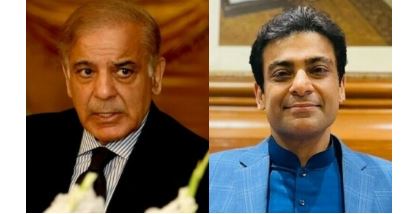 ISLAMABAD, JUL 30: A special court in Lahore on Saturday summoned Prime Minister Shehbaz Sharif and his son Hamza Shehbaz on September 7 for the framing of charges in a Rs16 billion money laundering case registered against them by the Federal Investigation Agency (FIA).

They have already been granted pre-arrest bails in the case.

During the hearing today, Shehbaz and Hamza’s lawyers submitted requests for a one-time exemption on their behalf.

Shehbaz’s lawyer Amjad Pervaiz informed the court that the premier had been advised against travelling as he was not well. “The weather was unpleasant yesterday which is why he did not come today.”

Meanwhile, Hamza’s lawyer Rao Aurangzeb said the PML-N leader had severe back pain and he had attached the medical report with the exemption request.

FIA Prosecutor Farooq Bajwa said the agency did not have any objections to accepting the exemption applications.

The FIA also submitted the death certificate of Malik Maqsood — frequently referred to as Maqsood ‘Chaprasi’ — a central figure in the case.

Bajwa said the agency was submitting the certificate after verification from the National Database and Registration Authority that Maqsood had died.

The court then stopped case proceedings against the deceased.

Separately, the FIA prosecutor informed the court that the agency had obtained the record of 19 bank accounts of Suleman Shehbaz, while the record of another seven was yet to be obtained.

“We have written to some agencies and their replies are awaited,” he added. “We have submitted details of Suleman’s properties that we have obtained so far.”

Subsequently, the court summoned Shehbaz and Hamza on Sept 7 for the framing of charges and adjourned the hearing till that date.

Fourteen others have also been named in the FIR under sections 5(2) and 5(3) (criminal misconduct) of the Prevention of Corruption Act.

Shehbaz and Hamza were previously set to be indicted on May 14 but it was deferred as the prime minister was not present in the country at the time.