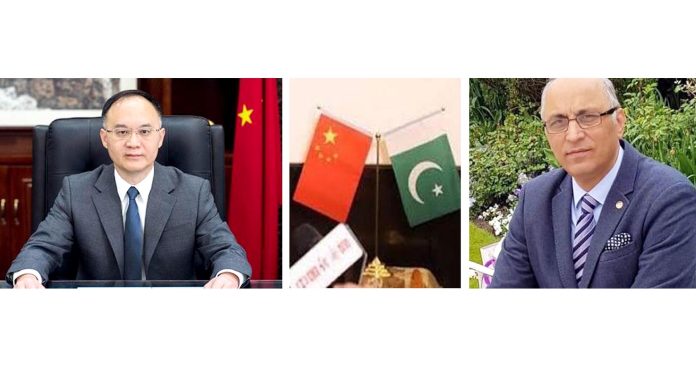 ISLAMABAD, Aug 19: The China-Pakistan Economic Corridor (CPEC) has contributed to the high-quality green and sustainable development in Pakistan, and it will push for more such cooperation to promote sustainable and green development in the country. The views were expressed by Chinese and Pakistan envoys at a webinar exploring green development under CPEC, according to a report published by China Economic Net (CEN) on Friday.

While delivering a keynote speech at the forum, Nong Rong, Chinese Ambassador to Pakistan said that China and Pakistan have boosted cooperation in green energy. “Five wind power projects have been completed under CPEC with a total capacity of 300 megawatts, and another 300-megawatt solar power project has been completed,” noted Nong Rong revealed that more green projects are ongoing under CPEC as “[the] Karot hydropower plant has successfully entered commercial operation[s] and large hydropower projects such as SK are progressing,” adding that the Matiari-Lahore power transmission line helps cut “the line loss from 17% to 4%, greatly reducing energy loss and improving efficiency.”Green and sustainable development is also generating huge employment opportunities in Pakistan, shared the envoy.

“According to statistics, CPEC has created 85,000 jobs for Pakistan,” Nong explicated, “For example, the construction of Gwadar port has created 4,000 jobs among which 3,800 are [taken by the] Pakistani people.” Such ideas are echoed by Moin Ul Haque, Pakistani Ambassador to China, who termed CPEC as a “people-centric, socially inclusive, environmentally friendly, and green and sustainable” initiative.

Haque said that “the recently completed Karot hydropower project is an example of [the] clean, green vision of CPEC” and that he was more than “happy to see more CPEC projects [being] taken into consideration in the green development aspect.” With a growing emphasis on green development, said Haque, China and Pakistan have been working to build a green corridor to focus on areas of agriculture, environment, food, climate change, and food security. “Our two sides are now working to finalise the blueprint of the green corridor to carry out practical cooperation.

And in this respect, agriculture has been identified as a key area of cooperation,” noted Haque.As per Haque, a bilateral meeting to this end will be held before the Joint Cooperation Committee (JCC) on CPEC this year, and an action plan is also underway with the support of many research institutions, the academia and ministries. Hosted by the Sustainable Development Policy Institute (SDPI), the CPEC Green-Development High-Level Policy Dialogue aims to engage the key stakeholders from China and Pakistan including the governments, investors, regulators, developers, academia, and civil society to reflect on the success of major initiatives implemented under the BRI and seek a better way forward.