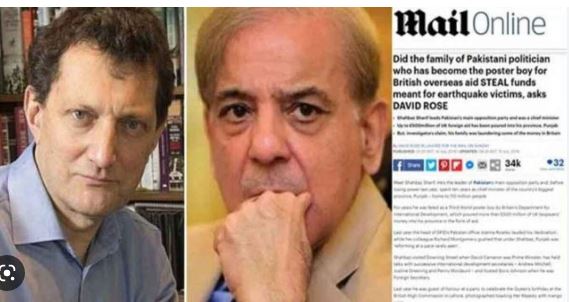 LONDON: British journalist David Rose has rejected claims of the ruling Pakistan Muslim League Nawaz (PML-N) regarding the apology tendered by the UK publication Daily Mail to Prime Minister Shehbaz Sharif, ARY News reported on Friday. David Rose posted a Twitter thread to clarify the Daily Mail’s apology. He wrote, “There seems to be some confusion in the Pakistani media about the end reached yesterday to the defamation cases brought by @CMShehbaz and Ali Imran Yousaf against the Mail on Sunday.”

The British journalist said, “The apology issued covers only one point: That NAB [National Accountability Bureau] did not accuse Mr Sharif of stealing large sums of DFID [Department for International Development] aid when he was chief minister of Punjab. The newspaper has not apologised for other allegations in the article, such as those covering alleged money-laundering.”

He added, “Messrs Sharif and Yousaf have not issued replies to our defences that comply with the requirements of English law. Those defences therefore stand, and are public documents.”

Rose clarified, “The newspaper has not paid Mr Sharif or Mr Yousaf either damages or costs, and it has not waived the costs orders made against them by Mr Justice Nicklin last month.”

“Mr Sharif and Mr Yousaf have settled their claims. The case is therefore over. The newspaper has removed the article from the internet. I shall be making no comment on the end to these proceedings,” said the journalist.

Earlier, Daily Mail apologised to Prime Minister Shehbaz Sharif for publishing an article that accused him of embezzling British foreign aid money meant for earthquake victims. The said article, written by investigative journalist David Rose, was removed from all platforms of Mail publishers.

However, it is pertinent to mention here that Daily Mail did not apologize for the allegations of money laundering and TT scandal against PM Shehbaz Sharif.