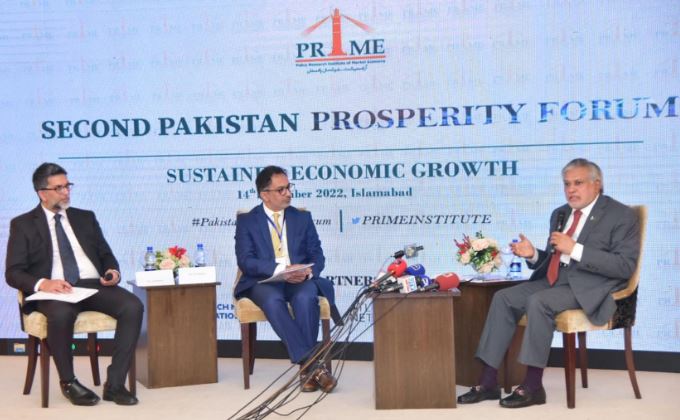 ISLAMABAD, DEC 14 (DNA) — Federal Minister for Finance and Revenue, Senator Mohammad Ishaq Dar here on Wednesday reiterated the idea of developing ‘Charter of Economy’ to keep the economy out of politics on sustainable growth path and lead the country towards progress.

“Politics must be detached from the economy” the finance minister said at the Second Pakistan Prosperity Forum on ‘Sustained Economic Growth: Roadmap and Roadblocks,” organized by Prime Institute and Business Recorder.

Instead of launching negative campaigns, the political parties should force the incumbent government to move the country back on the path where it was in 2017. He lamented that the Pakistan was going to be part of G20 in a few years owing to the policies of Pakistan Muslim League government, however instead of making collective efforts to reduce this timeline, negative campaigns put the country away from the target.

However, he was optimistic that it was not late to enable the country become part of G20 with collective efforts of all. He said if conference are held abroad and people are told that Pakistan was debt trapped county, or corrupt country, who would choose it for investment.

Talking about the debt issue, the minister said it was below Rs25000 billion when the Pakistan Muslim League (N) left in 2018 and if debt liabilities are added, it was calculated at Rs30,000 billion. However, it reached to Rs44500 billion within a few months after PML(N) left and stands at Rs54500 billion currently.

“This is an unbearable increase in the debt” the minister remarked adding that the debt piled up due to two main reason including skyrocketing of fiscal deficit and fall in rupee value. He said, Rs4000 billion were added to public debt on external side due to rupee depreciation.

He said, the rupee was allowed free fall to help enhance exports, which during the three years, increased only by $800 million whereas the country was inflicted loss of Rs4000 billion in terms of debt increase. He said, the incentive packages of Rs180 billion and Rs67 billion provided to export-oriented industry in 2017-18 were based on the performance of industry in enhancing exports. Had the upcoming government followed the model instead of mismanaging subsidies, the condition would have been different now.

On exchange rate issues, the federal minister said in any system there are certain speculators, gamblers, hundawalas, who take country’s currency as hostage. So, if the state did not come in play, “then what will happen, is what has happened now.” He said, Bank of England, Bangladesh and India do intervene, so the governments had to make sure that the abusive practices are checked. He said, Pakistan had constraints of foreign reserves, so it cannot afford these malpractices.

He said, dollars and urea were being smuggled to neghbouring country adding Pakistan Customs caught smuggler with 100,000 dollars. He said urea fertilizer, which Pakistan imports for local consumption and had to give subsidy on domestic production, was being smuggled to neghbouring country, which he said was causing loss to the national exchequer. =DNA