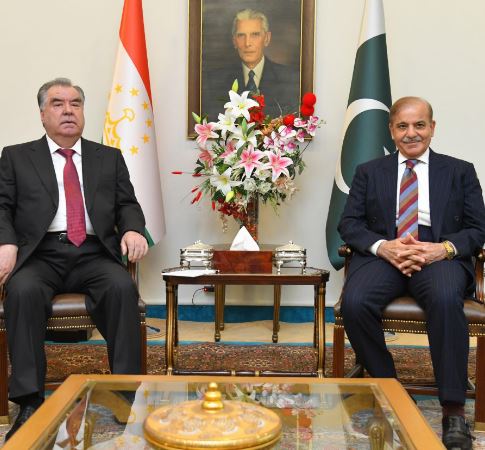 He made the remarks while addressing a press conference alongside Tajik President Emomali Rahmon, who arrived in Pakistan earlier today on a two-day visit. Earlier in the day, the two leaders held a one-on-one meeting at the Prime Minister’s House.

Addressing the joint press conference, where the two leaders signed memorandums of understanding (MoUs), PM Shehbaz said: “We need to work very closely with each other to strengthen our economic cooperation and enhance our bilateral trade in the field of industry, agriculture, joint ventures and energy cooperation.”

The prime minister said Tajikistan had a very “important place” in Central Asia and was a “gateway” to the region.

He went on to say he was looking forward to working closely with Rahmon for the completion of the Casa-1000 power project as early as possible as well as for establishing rail, road and energy connectivity with Central Asian countries.

He hoped that the Tajik president’s visit would usher in a “new era of cooperation and development” between the two countries.

Regarding their earlier discussions, PM Shehbaz said the two leaders had “very productive and useful” talks which focused on strengthening relations between their countries, promoting investment and enhancing trade and cultural exchanges.

Earlier, President Rahmon was accorded a red-carpet welcome upon his arrival at the Prime Minister’s House, where he was received by the premier. He was presented with a guard of honour. Later, he also planted a sapling in the lawns of the PM House.