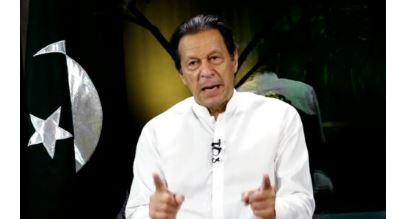 Says visiting Russia a day before Ukraine invasion was “embarassing”

MANDI BAHAUDDIN, NOV 14 (DNA) — Pakistan Tehreek-e-Insaf (PTI) Chairman and former prime minister Imran Khan on Monday claimed that the decision over the snap polls is being made in London.

Addressing the participants of the long march via video link, the former prime minister said, “I hope that the Chief Justice of Pakistan will hear the case of an assassination attempt on him. Today our lawmakers appeared before the SC to file an application over an assassination attempt on him. The country has to be headed towards the path of rule of law as this is the decisive moment.”

Lashing out at Prime Minister Shehbaz Sharif over the Daily Mail case, the PTI chief said, Shehbaz was fined by the London’s court as the court emphasized that everyone is equal in terms of the law. In Britain, the rule of law very much exists. Questing how could be it possible that PM Shehbaz Sharif consults the absconder [Nawaz Sharif] over important decisions of the country like the Army Chief’s appointment and snap elections as this is a violation of the Official Secret Act.

Imran lamented that he could not register the FIR over an assassination attempt on him, being the country’s former premier, adding that is important to establish a system of justice to make the county prosperous. Saying that in the Riyasat-e-Madina, the system of justice was established first, Imran added that the countries where the rule of law and justice prevail are prosperous.

In an interview where he signaled his desire to build better ties with United States based on mutual respect, PTI Chief Imran Khan said that Pakistan he wants to lead must have good relationships with everyone, “especially the United States”.

“Our relationship with the US has been as of a master-servant relationship, or a master-slave relationship, and we’ve been used like a hired gun. But for that I blame my own governments more than the US,” said Imran Khan. The PTI chief also criticised the IMF programme for terms that directly affect the common man, decreases consumption and halts growth.

“When you contract the economy, and some of the IMF measures make your economy shrink, how are you supposed to pay off your loans, because your loans keep increasing?” he said. “Consumption has crashed?.?.?.?So my question is: How are we going to pay our debts? We are certainly going to head towards default.” =DNA