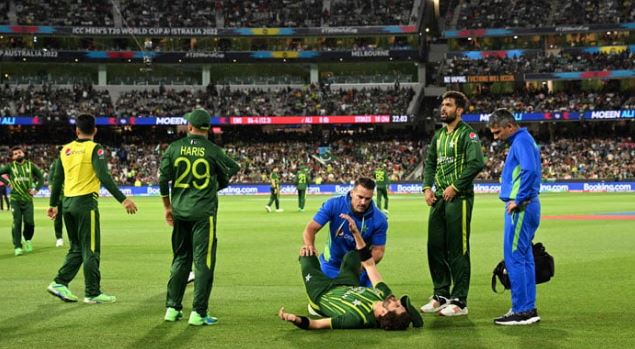 LAHORE: Amid reports of a serious injury scary, Pakistan Cricket Board (PCB) shared on Monday that Shaheen Shah Afridi’s scans have shown “no signs of an injury” but has been advised two-week rehabilitation

The board said that scans, conducted before the team’s departure for Pakistan, showed “no signs of an injury”. It added that the source of the knee discomfort was likely “due to a forced knee flexion whilst landing”.

“Shaheen will undergo rehabilitation and conditioning programme that has been designed to strengthen his knee at the National High Performance Centre few days after his return to Pakistan,” said the statement.

The PCB said that the fast bowler’s return to international cricket will be subject to the completion of the rehabilitation programme and following go-ahead by the medical staff.

Afridi had to limp off the field due to knee discomfort during the final and was unable to deliver his final two overs, which could have changed the course of the match for the better.

The pacer took a brilliant catch of Harry Brook to send the middle-order batter back to the pavilion but injured his knee in the process.

“Shaheen Afridi landed awkwardly on his right knee. The medical panel is treating him and will provide any further update in due course,” the PCB had said in a brief statement, soon after the injury.