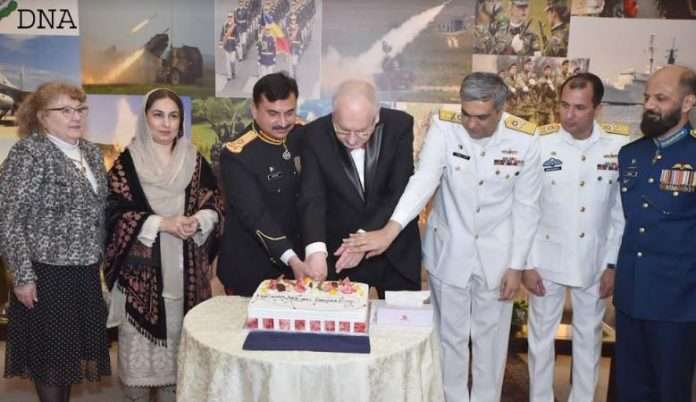 ISLAMABAD:   Ambassador of Romania Nicolae Goia has said   Romanian Armed Forces, completely reformed and modernized up to the NATO and European Union standards are assigned to foreign missions, contributing alongside of the allied and partner countries to the common effort of keeping peace and stability worldwide.

In compliance with the commitments deriving from the international treaties, agreements and memoranda whose signing party is, Romania had contingents of different sizes from all services – Army, Air and Naval Forces – available to multinational coalitions authorized to carry on peace support, humanitarian assistance, collective or individual operations in the framework of UN, NATO, OSCE and EU-led Observing, Monitoring, Liaison and Training teams.

Ambassador Goia expressed these views while speaking on the occasion of the Armed Forces Day of Romania. He along with Defence Attache Col Cristian Raducu hosted a reception. Mal Gen Fiaz Hussain Shah was the chief guest.

The ambassador further said Romania celebrates each year, on October 25th, the Day of the Romanian Army. October 25, 1944, the Romanian Army Day, signifies the date of complete liberation of north-western Transylvania from foreign ruling and administration.

‘The liberation of the entire national territory of Romania was achieved by the heroic fights in the World War II of over 525,000 fully employed troops between August 23 and October 25, 1944. Nearly 58,000 of them were killed or injured. Losses incurred on the enemy stood at 89,934 troops, 76,275 of whom were taken prisoners. It is worth mentioning that after 25th of October the Romanian army had continued to fight until the end of the war contributing substantially to the liberation of Hungary and Czechoslovakia’.

Ambassador Goia said, the years of contribution to foreign missions meant for the Romanian Armed Forces the maintenance, almost continuously, of a military force of variable sizes, integrated into UN, OSCE, NATO and EU missions carried out in Africa and Asia, in the theatres of operations in Afghanistan, Iraq and Western Balkans. Almost 40,000 Romanian troops took part in different operations and missions out of national borders, gathering a valuable professional experience extremely useful in the transformation, operationalization and interoperability enhancement process of the Romanian Armed Forces with their NATO and EU counterparts.

Romanian Armed forces wisely and skilfully planned their combat forces to fight the war on terror far away from the national borders, proving their capability and determination to fully carry out their missions. Romania remained consistent with its commitments to support the international community in the fight against terror.

The contribution of the Romanian troops to the collective defence, peace keeping and restoration missions to enforce the stipulations of the UN Security Council Resolutions, of the international legislation and law reveals that the Romanian state complies consequently and in full faith with the commitments agreed with the allies and partners, according to the international legislation and treaties whose signing party is Romania. By performance and professionalism, dedication and determination, the Romanian Armed Forces are a true ambassador for Romania’s image worldwide!

He said, unfortunately, we are living in a very complicated security environment. The world of today, the security challenges we have to deal with every day, along with the war going on at NATO and EU borders, as well as Romania’s border with Ukraine – all these prove that we need to be ready to defend our common values and freedoms and grant security and stability. Moreover, Ukraine’s security means European and Euro-Atlantic security.

In line with the NATO and European Union’s policy, Romania stands in full solidarity with the people and government of Ukraine in the heroic defence of their country, helping Ukraine to uphold its fundamental right to self-defence with unprecedented levels of support as a response of Russia’s full-scale, brutal, unprovoked and unlawful invasion of Ukraine

‘I am very pleased to underline the excellent cooperation existing between Romanian and Pakistani armies which have developed over the years into a true and mutual beneficial partnership. Since there is not time to elaborate on the multifaceted and complex character of the cooperation, I will only mention that on October 12th this year, during his official visit in Romania, the Chief of Naval Staff Admiral Muhammad Amjad Khan Niazi performed symbolically the initial welding work on the keel of the third vessel built for Pakistani Navy at Damen Shipyard Galati and cut the first plates of steel for the construction of the second batch two Damen OPV 2600 multi mission patrol vessels’.

Ambassador Goia said those vessels will provide the Pakistan Navy with a highly effective search and rescue capability, and allow it to play an important role in safeguarding international trade routes from piracy and other threats like drugs and human trafficking and terrorism.

‘Also, between 10-12 November, the 3rd session of Joint Military Committee will take place in Bucharest and I am sure that during this activity new domains of cooperation will be identified’.

He acknowledged the excellent professionalism of the Pakistani army, the deep patriotism of its men and women in uniforms, the sacrifices they made in fighting terrorism, their presence in multiple international coalitions authorized to participate in maintaining peace, humanitarian assistance and other operations meant to ease the sufferings of the people in different regions of the world, he added.