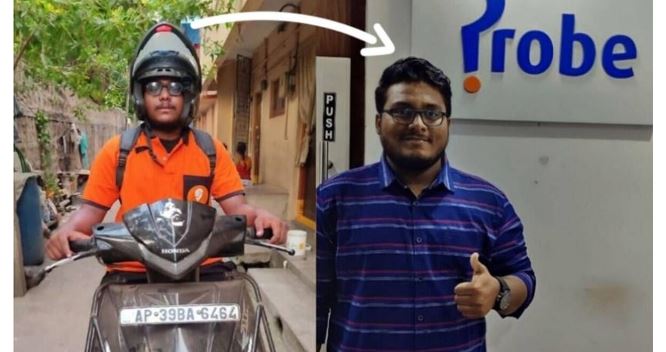 While no job is small, doing even odd jobs to be independent while working towards your dream gives a different kind of satisfaction. One such story of “a delivery boy with a dream” who became a software engineer is inspiring many on social media.

During his final year of college, Shaik Abdul Sathar from Visakhapatnam, Andhra Pradesh, worked numerous jobs in the gig economy. From delivering food for Zomato and Swiggy to driving cars for Ola and Uber and even giving rides for Rapido, Sathar has done it all.

“I wanted to contribute financially as soon as I can. Because my father is a contract worker. So we only had just enough money to get by,” he wrote in a LinkedIn post. However, when one friend said there could be more in store for him and suggested he learn coding, Sathar gave it all to be in a better place financially. While he toiled hard moving from one place to another handing out orders from 6pm to midnight, he spent his “mornings learning to code”.

Besides using his earnings as pocket money, he also took care of the “small needs for my family”. Soon, he was able to build web applications on his own. “I did a few projects and started applying for companies,” Sathar said in his now-viral LinkedIn post.

Finally, his hard work paid off as he acquired communication skills. Using his coding skills acquired from NxtWave, he bagged a software engineer job at the Bengaluru-based company Probe Information.

“From a place where I had to be careful about every rupee, I came to a stage where I can clear my parents debts with a few months’ salary,” said the young man.

As he expressed his gratitude for all the life-changing experiences during his final year in college, others were deeply moved by his story.