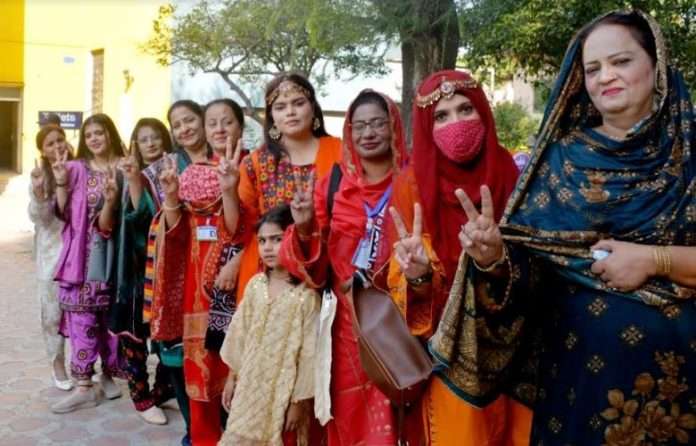 ISLAMABAD, OCT 14 /DNA/ – For the first time Election Commission of Pakistan in collaboration with NADRA has made it mandatory with visits of mobile registration vans (MRVs) to ensure registration of transgender persons and people-with-disabilities at their doorstep to make political processes inclusive.

However, there are other facilities like preferential voting procedure and postal ballot facility which can be used actively by old people, transgender persons and people-with-disabilities (PWDs).

The rural women representing 120 districts of the country urged all political parties to allocate 50 percent ticket to women candidates in elections from national, provincial to local level.

PODA-Pakistan has been organizing annual rural women conference since 2008 in connection with the International Rural Women Day that is observed on 15th of October every year. The conference provides where rural women and their leadership bring their issues and solutions on the front vocally for change to reduce gender gap in every sphere of life. This is the consecutive 15th conference in which rural women from 120 districts of the country have gathered urging policymakers to optimize women’s role and contributions in the overall progress of the country.

Ms. Nighat Siddique applauded the role of the civil society and the government institutions which played crucial role in reducing the gender gap in voter registration from 10 percent to 8.6 percent. “To reduce the existing gap of seven hundred thousand between women and men voters, Election Commission of Pakistan in collaboration with National Database Registration Authorityhas decided to extend CNIC (Computerized National Identity Card) and voter registration facilities to 13 more districts in Balochistan.

With this we are also focusing on enhancing registration in newly merged districts in Khyber Pakhtunkhwa,” said Nighat Siddique,DG, ECP addressing a vibrant audience of rural women over 600 hundred representing 120 districts of the country.

The session was focused on “Developing Rural Women’s Linkages with Disability Working Group of the Election Commission”. For this session ECP partnered with PODA-Pakistan. ECP has setup a stall to demonstrate entire voting process at the conference venue.

This is pertinent to mention here that Pakistan is one of the most unequal countries in the world for women, ranked at 153 out of 156 countries (WEF 2021).

Later, during the second half of the day’s proceedings, Dr. Robina stressed the need to set minimum age for marriage 18 years to save girls from a wide range of emotional, physical and psychological illnesses. She narrated a dismal picture of the girls who get married at early age in all regions of Pakistan. “At the moment there are 35000 girls with fistula that is an implication of early age marriages among girls.

The girls affected by this condition during child birth are forced to live with animals because  they are not able to control their urine. This happensamong due to early marriages.” Dr. Robina advocated strongly saving girls from the social of curse of child marriage especially in flood-affected areas. “

Sharing miseries of flood victims of people of Swat, Rukhsana Jahengir said “my Swat is in pain due to the sufferings and loss caused by current floods in the area. People are in dire need of help of all kinds.” Amna Jamali briefed about the situation of the flood-affected areas of Balochistan.

Observing International Rural Women Day tomorrow, the 15th Annual Rural Women Conference will be concluded on a pledge to work for an inclusive society. Speakers and panelists  lauded the efforts of PODA-Pakistan to connect rural women of four provinces and regions of AJK and GB.

MuzhatShirin, Chairperson Sindh Commission on the Status of Women also shared information about the flood victims.