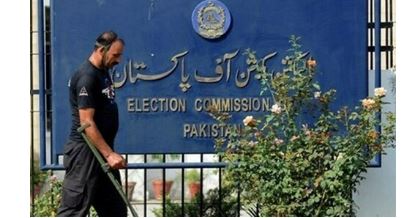 ISLAMABAD, JUN 2: The Election Commission of Pakistan (ECP) on Thursday stayed the notification of new MPAs on five seats of the Punjab Assembly reserved for women and minorities after they fell vacant following the de-seating of 25 dissident PTI lawmakers.

A five-member bench announced the ruling, which was reserved earlier today, in line with the Lahore High Court’s (LHC) directives.

Last month, 25 PTI dissident lawmakers, which included five elected on seats reserved for women and minorities, were de-seated for voting for PML-N’s Hamza Shehbaz in the Punjab chief minister’s election. They were officially de-notified by the ECP on May 23.

The PTI filed a petition in the LHC on May 28 requesting it to direct the ECP to notify the five new MPAs and “summon [them] personally”. Subsequently, the high court had given the ECP a deadline for June 2 to decide on the matter.

The electoral watchdog, in its decision today, said the notification would be stayed until by-elections are held. It also rejected the PTI and PML-N’s petitions.

Responding to the development, PTI Vice President Fawad Chaudhry criticised the ECP and said the party would challenge its verdict in the Supreme Court.

Arguments made in the case today

During the hearing at the ECP today, PTI’s lawyer Faisal Chaudhry argued that the incumbent government in Punjab does not have the majority and, therefore, does not deserve to rule.

He said the ECP should “immediately” issue notifications for new MPAs on the reserved seats and contended that as per the Constitution, the new MPAs would be from the same party the previous ones were de-seated from.

Meanwhile, PML-N’s counsel Khalid Ishaq contended that the case was that of a “first impression” and the principle of proportional representation could not be ignored.

He requested the Election Commission to notify new MPAs in accordance with the current proportion in the Punjab Assembly.

For his part, Attorney General of Pakistan Ashtar Ausaf argued that the principle of proportional representation could not be applied until the Assembly was “complete”.

“Twenty of PTI’s seats have been reduced, after which they cannot have the same proportion. Nobody can tell which party will be successful in by-elections.”

Ausaf said it would be “more appropriate” if the ECP waited until the by-elections.

The votes of the 25 PTI dissidents had been instrumental in helping Hamza get over the line in the election for the chief minister; he received a total of 197 votes while 186 votes are required for a simple majority.

On May 20, the electoral watchdog had passed an order to de-seat these lawmakers, stating that they had defected from the party under Article 63-A of the Constitution, which bars lawmakers from voting against the party line in the election of prime minister and chief minister, in a vote of confidence or no-confidence, a Constitution amendment bill and a money bill.