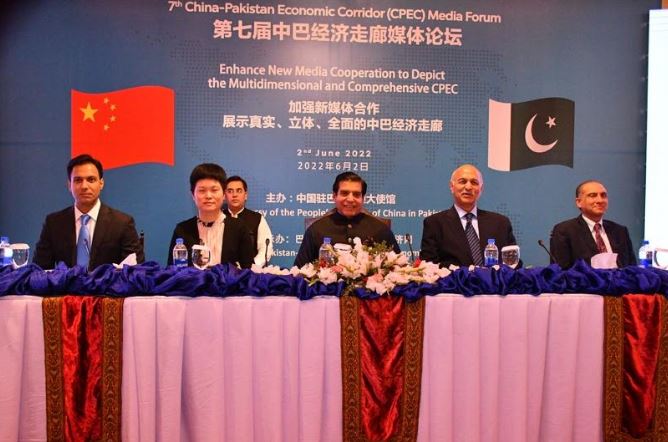 Islamabad, JUN 2 /DNA/ – The 7th China-Pakistan Economic Corridor (CPEC) Media Forum was held here in Islamabad. The forum was jointly organized by the Pakistan-China Institute (PCI) and China Economic Net (CEN) in cooperation with the Embassy of the People’s Republic of China in Pakistan.

It is conducted as an annual event in Beijing and Islamabad on alternate years. The theme of this year’s forum was “Enhance New Media Cooperation to Depict the Multidimensional and Comprehensive CPEC”. The Forum conducted in-depth exchanges and discussions on topics including ‘CPEC Phase 2: Opportunities & Challenges’, ‘Pakistan, Global Development Initiative, and the Role of Media’, and ‘Objective and Fair reporting of CPEC’. The opening session was moderated by Mustafa Hyder Sayed, the Executive Director of the Pakistan-China Institute. Speaker National Assembly of Pakistan, Raja Pervez Ashraf was the Chief Guest.

The establishment of the CPEC Media Forum in 2014 has paved the way not only for international information sharing and news collaboration, but also for the people of both countries to learn about, and from, each other.In his opening remarks, Senator Mushahid Hussain Sayed thanked China for helping Pakistan during COVID-19 by extending much-needed medical and moral support, which saved millions of lives.

China, he said, established an air corridor for 6 weeks in March-April 2020 which enhanced Pakistan’s capacity to contain the pandemic at home. Commenting on the dividends of CPEC, he said that CPEC has created 75000 jobs for Pakistanis so far, and energy projects under CPEC have produced over 5000 MW of electricity. While rejecting the Cold War Mentality, he advocated for multilateralism and connectivity and said the enemies of Pakistan-China friendship have launched a campaign of disinformation and fake news against CPEC. Pakistan-China relationship, he maintained, has withstood the test of times and emerged as a uniquely robust  and resilient relationship.

Raja Pervez Ashraf, Speaker National Assembly of Pakistan, in his keynote speech said that CPEC has changed the destiny of so many people in the country and, in fact, through CPEC, China has given a vote of confidence in Pakistan’s potential to build a better future. Not even a day passes when we don’t hear about development by Chinese enterprises on CPEC projects in the media. The professionalism and consistency through which Chinese enterprises continued work on CPEC despite a global pandemic like COVID-19 when almost every project in the world hit the snag, has been lauded by the governments of Pakistan and China as well as international media. As the CPEC moves forward, the media’s responsibility to report fairly and factually on CPEC would grow.

Moreover, he said that the media, since the inception of CPEC, has played a very important role in the dissemination of facts on CPEC. He also commended Pakistan-China Institute and China Economic Net for hosting the forum and said that through events like these, both countries get an excellent opportunity to consolidate the existing all-weather friendship. A special video message by the Foreign Minister of Pakistan, Bilawal Bhutto Zardari was played during the event. He said that the Pakistan-China relationship is indeed a special relationship that has no parallel in contemporary international relations. For me personally, he remarked, it is a great honor to be talking about this special bond because my grandfather Prime Minister Shaheed Zulfiqar Ali Bhutto is the architect of this very relationship and in 1963, he signed a historic boundary agreement between Pakistan and China.

He was also the last world leader to meet Chairman Mao. Moreover, he said that the Pakistan Peoples Party is committed to sustaining, maintaining, and continuing this relationship.Madame Pang Chunxue, acting ambassador of China in Pakistan said that we need to encourage the strengthening of narrative building and join hands in combating fake news. Some western countries continue to slander China on issues related to Xinjiang, Tibet, Hong Kong, and spread rumors on CPEC. Media bears the sacred mission of advocating order and justice. She said that we should take advantage of our complementarity, increase positive publicity, take the initiative for building narratives from our own perspectives, and jointly respond to negative public opinions.