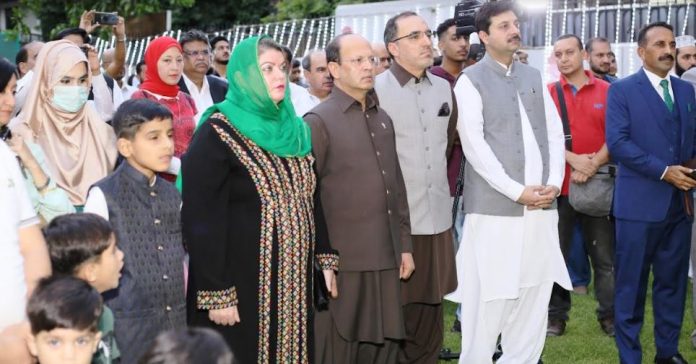 CAIRO, AUG 14 /DNA/ – Ambassador Sajid Bilal hoisted Pakistan flag at the Embassy of Pakistan in Cairo to mark the 75th Anniversary of Independence, today. After the flag hoisting, the ceremony commenced with the recitation of the Holy Quran, and reading out of messages of the President and the Prime Minister for the audience.

Earlier, on the eve of Independence Day, the Embassy arranged a festive reception attended by Pakistani families in large numbers, including from cities of Isamilia and Alexandria.

The event commenced with the recitation of the Holy Quran and prayers for peace, stability and prosperity of the country and its people. The recitation was followed by playing of national anthem; the audience joined to sing the anthem with great zeal and fervor. On the occasion, the students of Pakistan International School presented a number of performances on national songs. The Ambassador was invited on stage to award certificates to the winners of Quiz and Art and Painting competitions arranged by the School as part of the Independence Day celebrations.

In his remarks, Ambassador Sajid Bilal paid tribute to the wisdom and foresight of the founding fathers of Pakistan for demanding a separate homeland for the Muslims of the Subcontinent. He also lauded the security personnel across Pakistan for providing the people safety and security from all kind of threats; and reminded that while we celebrate our freedoms, we should not forget to remember our Kashmiri brothers and sisters who are still striving to win freedom from illegal Indian occupation.

Towards the end, community notables and the Embassy team joined the Ambassador to cut the Independence Day cake, amid the slogans of “Pakistan Zindabad”.

The event was attended by more than 250 Pakistanis from across Egypt.