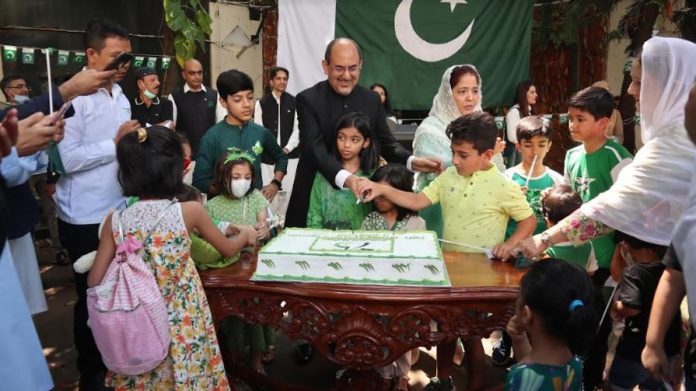 Jakarta, AUG 14 /DNA/ – The Embassy of Pakistan in Jakarta celebrated the 75thanniversary of the Independence Day of Pakistan on 14 August 2022 with traditional fervor in a simple but dignified ceremony which was attended by a large number of Pakistani Diaspora along with their families, friends from Indonesia and electronic and print media representatives.

The event commenced with the hoisting of the National Flag by H.E. Ambassador Muhammad Hassan followed by reading out the messages of the President and the Prime Minister of Pakistan, received on the occasion.

H.E. Ambassador Muhammad Hassan, in his remarks, paid homage to the founding fathers and highlighted the achievements and progress of Pakistan in the past years. The ambassador expressed resolve of the government and the people to make Pakistan economically stronger and more prosperous and to continue to make our society humane, inclusive, and tolerant. He also reaffirmed the pledge to uphold democratic values, rule of law, and the Islamic way of life in Pakistan as envisioned by the founding fathers.

The Ambassador expressed unshakable support for the people of Indian Illegally Occupied Jammu and Kashmir and the resolve of the government and people of Pakistan to continue moral, political, and diplomatic support for their legitimate right of self-determination.

With regard to Pakistan-Indonesia relations, the Ambassador highlighted various aspects of the multifaceted relations between the two countrieswhich were based upon strong historical bonds andexpressed satisfaction over expanding bilateral relations. He also stressed the need to explore new vistas of bilateral cooperation and mentioned that Pakistan was keen to deepen economic engagement and trade relations with Indonesia to harness its full potentials.

The Ambassador acknowledged the contribution of the Pakistani community in Indonesia for strengthening the ties between the two countries. He appreciated the members of the community for not only contributing to the economic development of the motherland and the host country but also playing their role in projecting the true image of Pakistan and highlighting our rich and diverse culture to the Indonesian people.

In the end, refreshments were served to the guests.