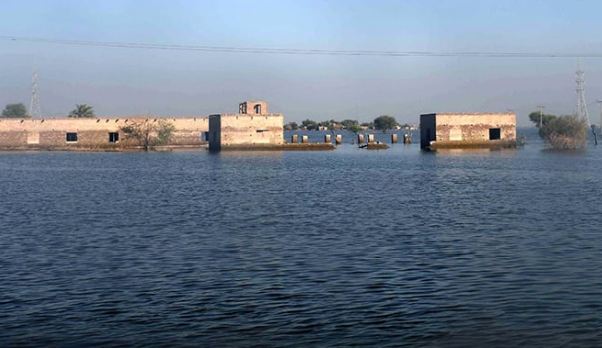 Prime Minister Shehbaz Sharif said Wednesday that the suffering of the flood-hit people was “endless” as the country is reeling from the devastation caused due to the natural calamity.

“Although massive funds are pouring in, the suffering is equally endless,” the premier said during his address to the flood affectees in Khairpur, Sindh — where he arrived for a day’s visit.

Pakistan was lashed by unprecedented monsoon rains over the summer that put a third of the country underwater, damaged two million homes and killed more than 1,700 people.

The situation in the flood-hit areas remains bleak as millions of people are without roofs and winters have approached — exacerbating their misery. The spread of diseases and insufficient healthcare facilities are also a challenge for the masses of the areas.

Vowing to support the affectees, the prime minister said the federal government would not leave the flood-affected people of Sindh in distress and would continue to take measures to mitigate their sufferings.

PM Shehbaz people of Sindh witnessed several challenges as floods wreaked havoc on the province. However, he mentioned that the federal government provided the “utmost resources” to the provincial government to help them overcome the massive problem.

He mentioned that under the Benazir Income Support Programme, the federal government disbursed Rs 70 billion to the flood victims. He said serving the masses and their welfare of the “priority of the government”.

PM Shehbaz said the rehabilitation and reconstruction work had been completed to a large extent, however, stressed that the de-watering of the inundated areas of Dadu required immediate attention.

In the wake of floods, he said, 20 million people — including nine million children — were in severe need of assistance, adding that the situation required resources worth billions of rupees to be addressed.

PM Sharif mentioned that Pakistan was facing the brunt of climate change despite minimal contribution to global carbon emissions.

He assured the flood-struck people that the government would construct houses for their proper accommodation. He also announced the establishment of a campus of COMSATS University in Khairpur.

The premier said around Rs5 billion rupees would be spent for the construction of houses for the flood affectees.

In a statement earlier, Federal Minister for Climate Change Senator Sherry Rehman said Pakistan has received only $4 billion in financial foreign assistance to support flood relief activities in the country — $3.64 billion in the form of loans and $435.03 million in the shape of grants.

Besides, out of 20 million flood-hit people, 14.6 million people still need emergency food assistance from December 2022 to March 2023, the federal minister.

Rehman said almost 3.9 million people in Sindh and 1.6 million in Balochistan are facing severe food insecurity, with 5.5 million people no longer having access to safe and clean drinking water.

“With 20 million people still currently dependent on humanitarian aid, the United Nations have received only 30% or $262 million of the $816 million under the floods response plan,” she said.

The rehabilitation and disaster-reconstruction needs were at least $16.3 billion. The amount did not include investments required to support Pakistan’s adaptation to climate change and the overall resilience of the country to future climate shocks.

UN Food Programme to run out of funds

The UN’s World Food Programme will run out of funds for Pakistan on January 15, said the director of its mission in the country Chris Kaye.

“We have a major and frankly, I think, very serious crisis ahead of us as we go into 2023 unless we get the required support,” he added.

The number of people in need of life-saving food assistance will grow from the four million previously identified to 5.1 million during the winter, said Kaye.

Between eight million and nine million have been pushed below the poverty line by the floods.

The monsoon washed away vast tracts of crops, with many already impoverished families losing their livelihoods.

While most of the floodwater has receded, some homes remain submerged, leaving families living on elevated roads or in displacement camps.

Some people have been pushed into child labour, child marriage or trafficking, the UN said.

Pakistan places highly in the rankings of nations vulnerable to extreme weather caused by climate change but is responsible for less than 1% of global greenhouse gasses.