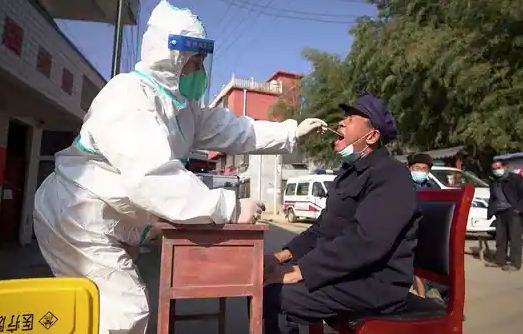 LONDON – It may be too early to declare the end of the Covid pandemic emergency phase because of a potentially devastating wave to come in China, several leading scientists and World Health Organization advisers told.

Their views represent a shift since China began to dismantle its zero-Covid policy last week, following a spike in infections and unprecedented public protests. Projections have suggested the world’s second largest economy could now face an explosion of cases and more than a million deaths next year after the abrupt change in course.

China’s zero-Covid approach had kept infections and deaths comparatively low among the 1.4 billion strong population, but WHO labelled it not “sustainable” this year due to rising concerns over its impact on both citizens’ lives and the nation’s economy. President Xi Jinping’s move last week has changed the global picture, experts said.

“The question is whether you can call it post-pandemic when such a significant part of the world is actually just entering its second wave,” Dutch virologist Marion Koopmans, who sits on a WHO committee tasked with advising on the status of the Covid emergency, told. “It’s clear that we are in a very different phase [of the pandemic], but in my mind, that pending wave in China is a wild card.”

As recently as September, WHO chief Tedros Adhanom Ghebreyesus had said “the end is in sight” for the pandemic. Last week, he told reporters in Geneva that he was “hopeful” of an end to the emergency some time next year.

Most countries have removed Covid restrictions as the threat of a dangerous new variant of the virus or of a major surge in infections has receded in the latter half of this year.

Tedros’s earlier comments spurred hopes that the United Nations agency could soon remove the Public Health Emergency of International Concern (PHEIC) designation for Covid, which has been in place since January 2020.

Koopmans and other WHO advisory committee members are due to make their recommendation on the PHEIC in late January. Tedros makes the final decision and is not obligated to follow the committee recommendation.

The emergency designation is the WHO’s highest level of alert associated with a disease outbreak, and it helps international organizations prioritize funding and assistance for research, vaccines and treatments. Some global health experts had expected China to wait for the WHO to lift the emergency status before easing its own pandemic response measures.

“Dr Tedros has to strike a balance here,” WHO Emergencies chief Mike Ryan told reporters in Geneva last week. “I think the world still has… work to do. The job is not done.”

Ryan said the WHO advisory committee was likely to meet informally before their official meeting next month, adding that unequal access to vaccines worldwide remained another key reason why Covid still likely represented an emergency.

He said increasing rates of other seasonal respiratory infections alongside Covid pressuring healthcare systems in the northern hemisphere was also a factor.

Alongside the risks for China, some global health figures have warned that allowing the virus to spread domestically could also give it space to mutate, potentially creating a new variant in line with how it has evolved when allowed to spread in other regions.

At the moment, data from China shared with both WHO and the virus database GISAID shows the variants circulating there are the globally-dominant Omicron and its offshoots, although the picture is incomplete due to a lack of full data.

“The bottom line is, it’s not clear [if] the wave in China is variant-driven, or whether it just represents a breakdown of containment,” said Tom Peacock, a virologist at Imperial College, London.

Either way, experts said the focus should be on helping China weather the surge, if the country calls for help. A key focus should be increasing vaccination for vulnerable populations where rates are low, particularly of the important booster dose, they said.

“I don’t think anybody can predict for sure whether we could see new variants that might be a concern to the rest of the world, but clearly the world should be concerned if people are becoming sick and dying [in China],” said David Heymann, an infectious disease specialist and WHO advisor who sits on a separate committee to Koopmans.

He added the situation in China would likely continue to represent an emergency, but that it may present more of a regional problem than global. WHO member states are currently working on re-designing the rules that govern global health emergencies to potentially address issues like this.