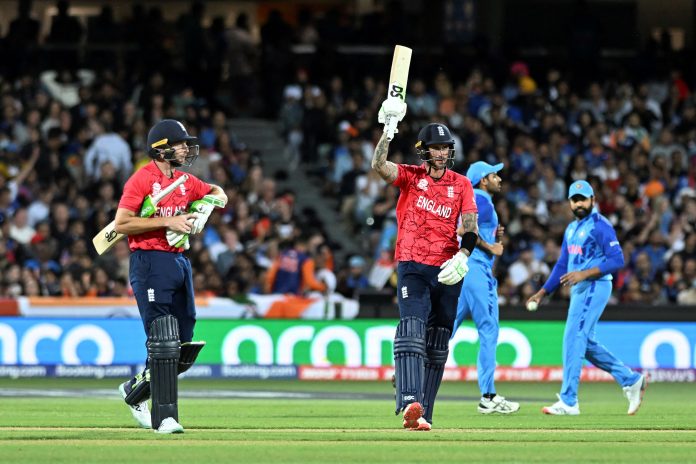 ADELAIDE: England stormed into the Men’s T20 World Cup final with a sensational 10-wicket demolition of India at the Adelaide Oval. Openers Jos Buttler and Alex Hales overcame a feverish India-supporting atmosphere and chased 169 without the loss of a wicket. They romped home with a massive 24 balls to spare to set up a final against Pakistan on Sunday and seal one of England’s greatest white-ball wins. Hales ended 86 not out from 47 and Buttler unbeaten on 80 from 49, the England skipper clinching the match with the pair’s 10th six. Earlier, England’s bowlers had restricted India well before Hardik Pandya’s 63 from 33 balls powered his side to what had looked a testing score. But Hales, recalled after more than three years in the international wilderness, gave England a rapid start and Buttler continued the onslaught. It denies the tournament what would have been a mouth-watering India-Pakistan finale, instead ensuring a repeat of the famous 1992 50-over World Cup final at the Melbourne Cricket Ground (MCG). This was supposed to be the night India joined their great rivals in what would have been one of the great sporting finals. A frenzied crowd was expectant but by the end, a small pocket of England fans were jubilant, the quietened India supporters drifting away. England’s bowling effort, without Mark Wood because of injury and up against India’s batting line-up of superstars, was tidy and disciplined, until they were knocked off course by Hardik’s late blitz. The batting was simply stunning. The imperious Buttler settled any nerves by taking three fours from the first over before he and Hales dispatched both pace and spin in seemingly effortless fashion. As the final majestic strike cleared the fielder and boundary at long-on, Buttler whipped off his helmet and roared with delight  A campaign that was floundering after defeat by Ireland two weeks ago could still end in glory. Pakistan, who have produced their own remarkable recovery to reach the showpiece, were beaten 4-3 by England in a seven-match T20 series in their own backyard last month. Eleven overs into the chase India’s ragged fielders looked beaten, the ball repeatedly travelling to, or over, the boundary rope. Buttler was dropped on 66 at mid-off by Suryakumar Yadav, with the ball ricocheting off his body and beyond Virat Kohli for four, but by then the contest was over. Having opted to chase on a used pitch, Hales and Buttler took on Adelaide’s short square boundaries to race along consistently at 10 runs per over. They took 63 from the powerplay – a clear contrast to India’s 38-1 – and did not look back. This was Hales’ greatest night in his England career, a career that looked over when he was unceremoniously dropped on the eve of the 2019 World Cup before being recalled for this tournament after the injury to Jonny Bairstow. He slog-swept spinners Axar Patel and Ravichandran Ashwin and cleanly struck the pace bowlers back over their head for seven sixes. After a quick start, Buttler settled into the supporting role before unleashing his ramps and power strokes in a canter to the finish line. England, who were missing the wicket-taking threat of Wood’s searing pace, were excellent in restricting India in the early stages. Chris Woakes got one to rise off a length and take KL Rahul’s edge in the second over, Rohit Sharma was caught at deep mid-wicket off Wood’s replacement Chris Jordan for 27 off 28 balls and when dangerman Yadav holed out at deep point off Adil Rashid for 14, India were 75-3 in the 12th over. Kohli’s first boundary was a glorious drive for six over extra cover but the former captain was unable to find top gear, Rashid particularly effective through the middle with a four-over spell that cost only 20. Hardik hit back-to-back sixes off Jordan – one a short ball pummelled over mid-wicket and the next a full ball sensationally flicked off his pads – before helping take 22 from the penultimate over bowled by Sam Curran. Eighty runs came from the last seven overs and 47 from the final three but in truth had Hardik added another 30, it would not have been enough.