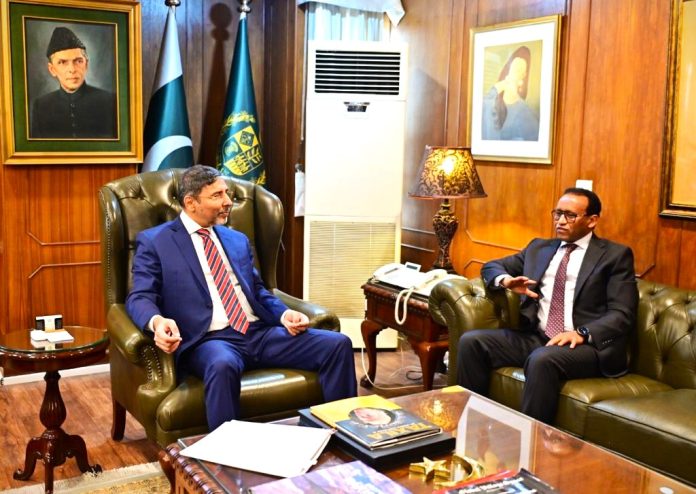 Pak hails Ethiopian govt for peace accord with TPLF

Acting Foreign Secretary of the Ministry of Foreign Affairs of Pakistan Jauhar Saleem on Thursday hailed the government of Ethiopia for signing a peace accord with the Tigray People’s Liberation Front (TPLF) to bring peace and stability in the northern Ethiopia in particular, and Horn of Africa in general.

The acting foreign secretary appreciated the Ethiopian government’s efforts for peace in a meeting with Ambassador Extraordinary and Plenipotentiary H.E. Jemal Beker Abdula who was called on him on 10 November 2022 at the Ministry of Foreign Affairs Islamabad.

During the meeting, both the dignitaries discussed matters of mutual interests and reviewed the entire gamut of bilateral, regional and multilateral cooperation between the two brotherly countries.

Ambassador H.E Jemal Beker briefed the foreign secretary on the peace agreement signed recently between the government of Ethiopia and TPLF to bring peace and stability in the northern Ethiopia.

He said indeed, this shows the commitment of the Government of Ethiopia to peace and security of its country and region as well. H.E. Jemal Beker said that the peace in northern part of Ethiopia would boost growth and development in his country by fast tracking the reforms agenda initiated by the current government under the leadership of Prime Minister Abiy Ahmed.

He highlighted the confidence building measures taken by his government to ensure successful peace talks which ultimately resulted into an all-encompassing peace agreement reached recently.

The envoy informed the secretary about the principled position of the government of Ethiopia on the issue and said it was striving to resolve the political disputes with political means and in a peaceful way. “Our government wants African led and African owned solution to an African problem,” the recent accord is the case in point, said the ambassador.

H.E. Jemal also lauded the role of the African Union which played key role in success of talks and signing of the agreement.  The AU would continue to play an important role in the implementation of the Agreement through the High-level Panel and through African experts to monitor the cessation of hostilities, he added.

He said the people of Ethiopia had taken a sigh of relief after the success of talk and believed that it would ensure a brighter future for the country.

He believed that a political solution was only way forward to keep Ethiopia united with its diversity and differences, adding his government takes pride in making it possible under the leadership of Prime Minister Abiy Ahmed.

Highlighting the objectives of the agreements, the envoy said the parties to the accord had agreed to a “permanent cessation of hostilities” to ensure a conducive environment for laying the foundation of sustainable peace.

He said the accord’s salient features also included restoration of the Constitutional order across the country, implementation of political solutions for the political problems, provision of a framework to address matters arising out of the conflict and their accountability, reconciliation and rehabilitation of social bonds, commitment to address the underlying political differences and formulation of a framework for monitoring and verification of its (accord) implementation.

The ambassador said it has been agreed in the agreement to restore the federal authority in the Tigray region including control of the federal institutions and agencies by the Ethiopian government.

On the other hand, the foreign secretary of Ministry of Foreign Affairs of Pakistan appreciated the recent peace agreement signed between the government of Ethiopia and TPLF and expressed their full support to implement the peace accord. He said it is a right and timely move to end the conflict and focus of reconstruction, rebuilding and development in which the government of Pakistan ready to support.

He further noted the existing and flourishing relationship between the brotherly and friendly countries and resolved to advance their national and collective interests at bilateral, regional and global level in this fast-changing global dynamism.

Finally, both the officials agreed to deepen the bilateral ties by increasing cooperation in diverse fields including trade, investment, tourism and technology transfer and capacity building.