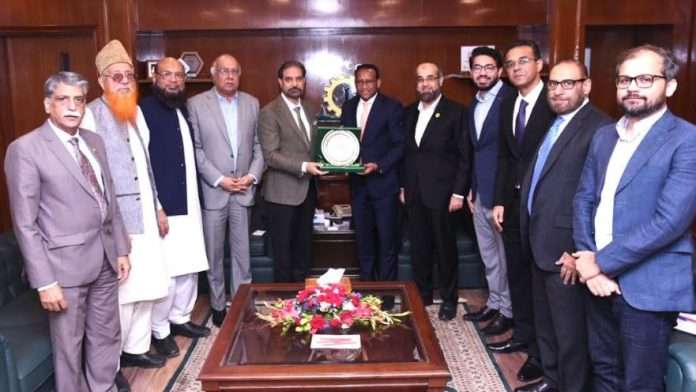 and senior Management where they discussed a range of Issues related to trade, investment, tourism, technology transfer and institutional cooperation. To this Ambassador Jemal highlighted the overall investment environment, rules and regulations, incentives and one shop service for the FDI.

Similarly, he said that Ethiopia has a very cheap clean energy and working to become the manufacturing hub of Africa due to its relatively trained and competitive labor force coupled with supportive government policy that make Ethiopia a preferred FDI destination.On top of that Ambassador said Ethiopia is the land of Origin for humankind, source of Nile longest river, and land of Coffee, BilaHabesh first Azan, and King Nejashi who well come the Ashaba, famous historical, archeological, and nature site seeing.

“Ethiopian airlines will soon be flying in Pakistan which will eventually boost tourism and bilateral trades between the two countries with marked improvement in people-to-people and business-to-business ties,” Mr Jemal Beker remarked.

He said Ethiopia had been offering online visas to the visitors as its incumbent government believed in opening up the country to boost its economy undertaking deep and penetrating reform that create conducive environment for FDI.Moreover, Ethiopia is a signatory of Multilateral Investment Guarantee Agency (MIGA) that protects and ensure the property and assets of the FDI and easy of repatriation of dividend. He said his country was a gateway to the African continent and Pakistani business community had vast opportunities to export their products to the entire Africa and import pulses, coffee, tea, oil seeds, and vegetables. Moreover, the Government of Ethiopia is ready to sign a number of agreements and MOU with the Government of Pakistan to facilitate the trade, and investment cooperation and collaboration between the two sisterly countries.

On the other hand, Mr. Irfan Iqbal Sheikh, the President of the Federation of Pakistan Chambers of Commerce and Industry appreciated the Government of Ethiopia support to the flood-affected families in Tent City of Sindh Province of Pakistan in which the Government of Pakistan and its People will remember this good gesture and became a history between the two countries.Apart from this, the President said Ethiopia is one of the fastest growing economies of the African continent, which implementing home grown economic reform that prioritize agriculture, manufacturing, mining, tourism and ICT sectors that offer an immense opportunity for Pakistan companies to work together with their counterparts. Similarly, he said Pakistan is known for quality textiles, pharmaceutical, surgery equipment, construction materials, and ICT technology that can benefit the consumer of Ethiopia in a competitive price.

Moreover, he reiterated that they want to establish institutional linkages with their Ethiopian counterpart so as toincrease bilateral trade, investment, and business between the two sisterly countries.

Finally, the President expressed his readiness to lead a delegation in early next year to explore, connect and advance the availed opportunities and create prospects of cooperation.