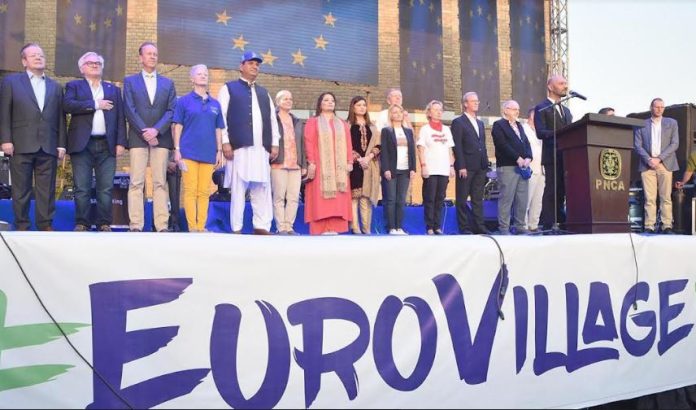 This edition of the Euro Village is special because this year the European Union and Pakistan celebrate 60 years of diplomatic relations: EU Ambassador

ISLAMABAD, OCT 30: European Union and its member states organized a festival “Unity in Diversity” for the residents of Islamabad and Rawalpindi to experience European culture and heritage, music and food.

Large numbers of people, especially families flocked to “EuroVillage” at the Pakistan National Council of Arts (PNCA) to enjoy the festival. Through games and quizzes, interactive information displays, and various activities, visitors learned what the EU’s motto “Unity in Diversity” means in practice and how it applies also to Pakistan.

Euro Village, which already attracted over 8,000 visitors in the past editions, took place for the first time after a gap of three years due to the Covide-19 pandemic.

The Ambassador of the European Union to Pakistan, Dr Riina Kionka in her welcome remarks said, “We cherish the diverse cultures, languages, religions, histories and identities that coexist in Europe. They are part of our wealth, they shape our shared values, connect us and give us a joint sense of purpose. It is this common understanding of shared values and diversity that lies at the heart of our relations with the world – including with Pakistan.”

As a symbol of this partnership, an EU-Pakistan friendship truck was displayed for the first time at the event. The truck will be travelling all around the country to reach Pakistani youth in various universities across the country and offer a window into the strong connection between the EU and Pakistan.

EuroVillage was organized by the diplomatic missions of the European Union and Austria, Belgium, Bulgaria, the Czech Republic, Denmark, France, Germany, Hungary, the Netherlands, Poland, Romania and Sweden. It included information and activity booths for both adults and children with interactive games, selfie corners, food and an opportunity to meet the diplomatic team and learn about areas of partnership. The event also featured live performances by European performers and Pakistani artists including Asim Azhar and Shae Gill.

The EU and Pakistan are bound together by a shared history. The partnership has progressed since 1962 in tandem with the European integration process. In 2019, the EU and Pakistan adopted a Strategic Engagement Plan with the common goal of building a strong partnership for peace and development rooted in shared values, principles and commitments.

This plan facilitates cooperation on a wide range of issues, including dialogues on counter-terrorism, education, democracy and human rights, migration, climate change, energy, trade and economics, and culture.

Pakistan is a major development partner of the EU, with one of the largest EU programmes in Asia. Together as “Team Europe”, the European Union and its member states have assisted Pakistan during the Covid-19 pandemic. In response to the catastrophic floods in Pakistan, Team Europe, including Norway, committed a total of €123 million, in addition to in-kind assistance, for the immediate relief and early recovery of the flood-affected population.

The EU is also a major provider of development cooperation assistance to Pakistan with a focus on green inclusive growth, human capital and governance, including the rule of law and human rights. The EU provides

Mogadishu, Oct 30 (AFP/APP):The number of people killed in an attack on Saturday at a busy intersection in the Somali capital Mogadishu has risen to 100, President Hassan Sheikh Mohamud said on Sunday.

“So far, people who died have reached 100 and 300 are wounded, and the number for both the death and wounded continues to increase,” he said after visiting the bombing location.

The afternoon explosions shattered windows of nearby buildings, sending shrapnel flying and plumes of smoke and dust into the air.

The attack took place at the same busy junction where a truck packed with explosives blew up on October 14, 2017, killing 512 people and injuring more than 290.

Mohamud described the incident as “history”, saying “it is the same place, and the same innocent people involved.”

“This is not right. God willing, they will not be having an ability to do another Zobe incident,” he said, referring to the Islamist group Al-Shabaab.

The jihadists have been seeking to overthrow the fragile foreign-backed government in Mogadishu for about 15 years.

Its fighters were driven out of the capital in 2011 by an African Union force but the group still controls swathes of countryside and continues to wage deadly strikes on civilian and military targets.DNA