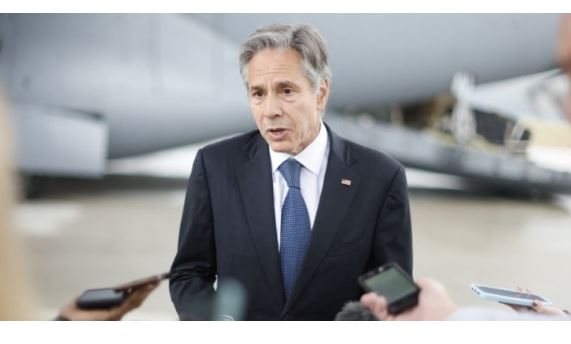 WASHINGTON: US Secretary of State Antony Blinken said Friday that Russia‘s war in Ukraine presented Europe with the opportunity to finally end its dependence on Russian energy.

Blinken made the comments after a surprise visit to Ukraine while en route to Brussels where he said he would be discussing energy security at a meeting with NATO representatives.

“There’s also a tremendous opportunity … finally once and for all, to move away from this dependence on Russia, to get rid of the chokehold that Russia has on Europe, using energy as a weapon, and to diversify supply, diversify routes,” Blinken said.

Europe, which is heavily dependent on Russian supplies, has accused Moscow of using energy as blackmail in response to sanctions over Russia’s military campaign in Ukraine.

“The fact that Russia has cut off the Nord Stream pipeline again is further evidence that it is so vitally strategic for Europe to move away from dependence on Russian energy because Putin has shown he will use it as a weapon and he’s not going to stop now,” Blinken said.

Since the beginning of Russia‘s February invasion, the EU has looked to reduce its dependence on Russian energy resources and has agreed a plan to decrease natural gas consumption across the bloc.