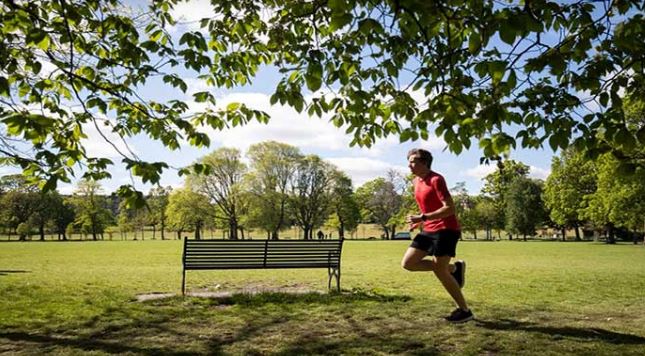 ISLAMABAD – According to the World Health OrganizationTrusted Source, obesity rates have tripled worldwide since 1975. The connection between obesity and insulin resistance is bidirectional. Insulin resistance often develops due to being overweight or obese, which can lead to type 2 diabetes.

Since type 2 diabetes can be a costly disease to treat, contribute to many health issues, and even be fatal, researchers are interested in learning about different ways to improve insulin resistance.

Exercise is an important aspect of health. Prior studies have shown it can improve insulin resistance. In a new study published in Diabetologia (the journal of the European Association for the Study of Diabetes), researchers found a connection between exercise timing and insulin resistance.

The beta cells in the pancreas produce insulin, a hormone the body creates that is responsible for regulating blood sugar levels.

Some medical conditions can impact the body’s ability to produce or respond well to insulin, including type 1 diabetes and type 2 diabetes.

Type 1 diabetes occurs when a person’s body produces little or no insulin. Doctors usually diagnose this form of diabetes earlier in life, and there is no cure.

Someone who develops insulin resistance may be diagnosed with type 2 diabetes.

According to the American Diabetes Association, insulin resistance occurs when a person’s body has “built up a tolerance to insulin, making the hormone less effective. As a result, more insulin is needed to persuade fat and muscle cells to take up glucose and the liver to continue to store it.”

This form of diabetes is more common in middle-aged and older people. Type 2 diabetes is also more prevalentTrusted Source in people who are either overweight or have obesity, and they can manage it through medications, diet, and exercise.

Unlike type 1 diabetes, people with type 2 diabetes can go into remission with lifestyle changes in some cases, including substantial weight loss.

The researchers examined data from the Netherlands Epidemiology of Obesity cohort study, which collected data from 6,671 individuals ages 45 to 65 between 2008 to 2012.

Some of the collected data included BMI, fasting and after-meal blood glucose and insulin samples, and MRI scans of people who could undergo imaging. Additionally, 955 participants wore activity monitors for 4 days.

For each of the 6-hour periods, the researchers looked at the different levels of activity recorded by the heart rate monitors.

Benefits of afternoon or evening exercise

After analyzing the data collected, the researchers did not find a link between breaks in sedentary activity and reduced insulin resistance.

However, they did find an association between insulin resistance and the time of day the participants performed moderate-to-vigorous physical activity, as recorded by the activity monitors.

They found no difference in MVPA and reduced insulin resistance in the morning segment of the data.

The researchers also examined the liver fat captured in the MRI scans and noted that the number of breaks in sedentary time did not impact liver fat content.

“Further studies should assess whether timing of physical activity is indeed important for the occurrence of type 2 diabetes,” the authors wrote.

Dr. Michael Sagner, President of the European Society of Preventive Medicine, spoke with Medical News Today about the study’s findings.

“It is certainly timely to investigate chronobiological effects of exercise,” said Dr. Sagner. “Timing of exercise is a relatively unexplored field in human studies and needs more studies.”

Dr. Sagner noted a weakness of the study being the limited 4-day window in which the participants were monitored and said more research is needed “if certain types of activity provide more health benefits when done during specific times of the day.”

“The present study cannot lead to any changes in the current recommendations. Physical activity is essential for health and disease prevention and should be built into the weekly routine, nevertheless the timing throughout the day.”
– Dr. Michael Sagner

“The study data analyzed was over a short period – four days” Dr. Patel pointed out. “It would be interesting to assess the liver fat and insulin resistance over a prolonged period of time, and also [its] relevance to populations of concern – such as pre-diabetics and diabetics.”

As Dr. Sagner also mentioned, Dr. Patel thought the important thing about exercise is to make it part of the routine rather than focus on the timing.

“The vast majority of people are so busy that finding any time to exercise regularly is challenging. Similarly to how we counsel on diet, I feel that consistency with exercise should be encouraged more than adding the additional challenge of finding ‘the perfect time’ to exercise.”