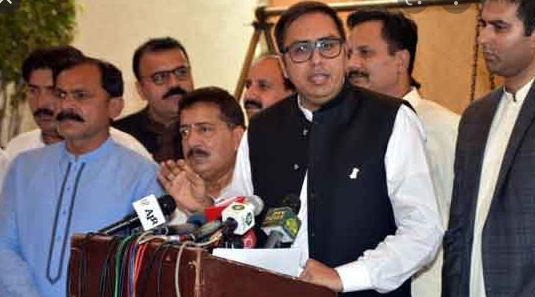 Addressing a press conference in Faisalabad on Saturday, he said that
the Pakistan Democratic Movement (PDM) chairman didn’t apologise to the
nation for his involvement in corruption worth billions of rupees.

The PM s Special Assistant paid rich tribute to all martyrs and the
Armed Forces for their sacrifices to make Pakistan strong. He appealed
to the people to commemorate the 6th September, the Defence Day with
great enthusiasm to pay tribute to the martyrs who sacrificed their
lives for defence and security of the motherland.

The Special Assistant said entire nation is proud of the families of the
martyrs and the armed forces. He said Pakistan s defence is in the
strong hands.

Earlier today, responding to a statement of PML-N leader Marryam
Aurangzeb, he said former Punjab Chief Minister Shahbaz Sharif spent the
entire budget of the province in one city for kickbacks.

The SAPM said the monthly expenditure of the Orange Line train was about
Rs 540 million against its revenue of Rs 60 million only. He said as a
CM Shahbaz Sharif benefited the sugar mill owned by his sons.

The past rulers did not consider abuse of power a crime for personal
business gain, he added.

Gill said the purpose of their politics was not public welfare but to
expand their businesses. He said they money laundered kickbacks under
the guise of business. The businesses of former rulers grew rapidly, he
said.

He said despite tall claim of not committing a single penny corruption,
money laundered billions of rupees.