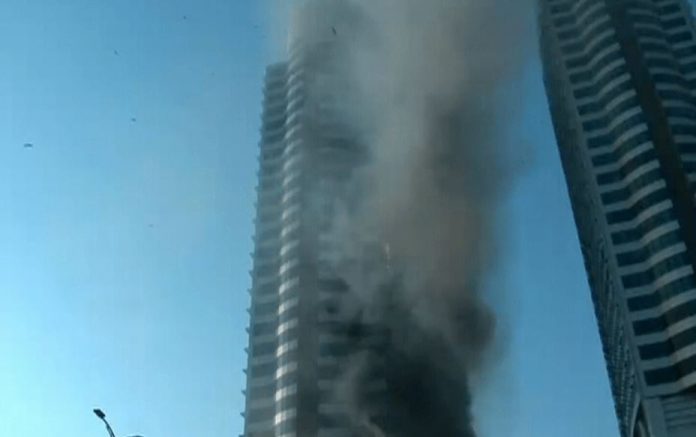 Islamabad, OCT 9: A fire in Islamabad’s Centaurus Mall on Sunday was brought under control after two hours, the Capital Development Authority (CDA) confirmed.

Residential apartments in the building were evacuated and fire brigade staff were busy putting out the fire even as plumes of smoke rose from the building.

Footage broadcast on television showed plumes of smoke billowing from the building, while in other clips people could be seen trying to escape using the mall’s escalators. The Islamabad police said that the building would be sealed, once the rescue operation was complete, on the orders of the city’s deputy commissioner till an investigation into the fire’s cause and no one would be allowed to enter it.Earlier, the capital police said that a search operation was underway in the mall.

The police also said that a helicopter was being called up as well to aid in the rescue and firefighting operation.

They added that the fire inside the mall was “under control” and no shop was damaged albeit there were still some flames on the mall’s exterior which were being extinguished.

Meanwhile, a spokesperson for the Pakistan Navy had said that the institution was also helping in the firefighting effort, adding that a navy team and three fire tenders were in use.

Prime Minister Shehbaz Sharif took notice of the incident and said he had ordered relevant institutions and authorities to take immediate action.

“It is very unfortunate that this incident happened in this well-known business centre. I pray that there is no loss of life. Condolences and sympathies for the financial losses of the victims,” he tweeted.

Interior Minister Rana Sanaullah also took notice of the incident and ordered the Islamabad administration and fire brigade to use all resources at their disposal to control the fire.

“The facility of helicopter from the relevant departments should also be used to extinguish the fire,” he ordered, further directing that the reasons for the fire should be examined so those responsible could be determined.

The interior minister instructed that a detailed report of the fire should be submitted to the Ministry of Interior.

The CDA said that its chairman was also present at the site and monitoring rescue and firefighting operations.

“All resources are being utilised to control the fire as early as possible,” the CDA added. The CDA said most of the affected area was undergoing the cooling process and the rest would be controlled soon as well.

Younis said that 60 to 70 per cent of the fire was under control, adding that it was moving upward via the balconies of the residential apartments.

“We have requested the helicopter, which will arrive shortly. The helicopter will help prevent the fire from spreading upwards,” the chief commissioner said, adding that three to four teams were sent into the mall to ensure that no one was inside.

He expressed hope that the fire would be brought under control in a while.