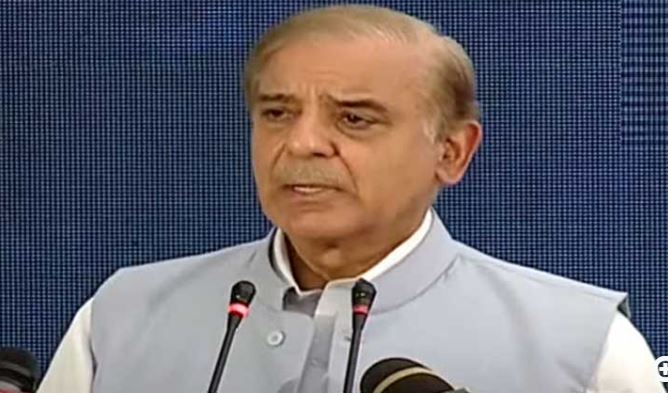 LAHORE, OCT 9 – Prime Minister Muhammad Shehbaz Sharif on Sunday said that by following the real essence of the teachings of the Seerah of the Holy Prophet (Peace Be Upon Him) and the path of Prophet’s (PBUH) companions, the country could only be transformed into a welfare entity on the pattern of Riyasat-e-Madina.

He said Allah Almighty had bestowed upon them a rare opportunity in the form of an independent country, and they should not waste it, but value the blessing of freedom. The prime minister stressed the need to rejuvenate the spirit of ‘faith, unity and discipline’ to steer the country out of the present-day issues.

The prime minister stated that a welfare governance system could only be achieved through the Quranic teachings and principles of Seerah (PBUH), and emphasised the importance of reforming the governance and judicial systems, creating equal and judicious opportunities for all, and prioritising the needs of widows and orphans.

He stressed that today, they were required to hold retrospection and evaluation of themselves under the ideals of Riyasat-e-Madina.

“Where we stand today in the realms of education and research, in the moral and social values, justice and nobility! these are the poking questions which require answers,” he said, adding how long they would confine themselves to mere traditional rhetoric.

Without naming PTI’s chairman, the prime minister questioned whether it was justified not to answer the judiciaryand mount attacks on the people who sought answers!

The prime minister further said that Tosha Khana, had become a source of personal earnings while rejection of law and judiciary were the common norms.

He stated that approximately 3.3 million people were under water, but certain elements were unwilling to sacrifice their politics in such a state of crisis, and were even unwilling to share their resources.

But it should not be forgotten, he said that people could be beguiled, but one had to be accountable for one’s deeds on the Day of Judgement.

The prime minister said the Holy Prophet (Peace Be Upon Him) arrived at a time when Arab society was witnessing inhuman rites and rituals. Evil-doing was considered a sign of bravery.

The Holy Prophet (PBUH) was a blessing for all humanity and a guiding light for those segments of society that had been lying low, he added.

Prior to his prophethood, the prime minister said the Holy Prophet (PBUH) was called “Sadiq and Amin’, due to the qualities of his character. He was an embodiment of love, affection, kindness, and virtue, and even the worst enemies were forgiven.

The Holy Prophet (PBUH) overcame all the hurdles and problems that were created on the right path, but did not utter words against his bloodthirsty enemies, he added.

The prime minister said the Holy Prophet (PBUH) established a real welfare state with a united charter in which the rights of non-Muslims were protected.
He said the two treaties proved to be historic milestones in the history of mankind, including Meesaq-e-Madina and Sulah-e-Hudaybiyyah. Besides, others, religious freedom was ensured for all.

The prime minister said that in Riyasat-e-Madina, the orphans, widows, and destitute people were looked after and no one slept with an empty stomach. Due to these qualities, he said, Islam spread across the globe.

The prime minister said state of Madina had ended the economic woes of the people and there was a time when no one was left in Madina to get Zakat due to economic prosperity.