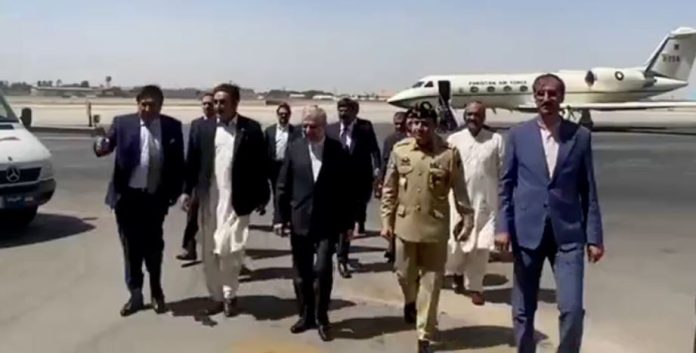 Foreign Minister Bilawal Bhutto Zardari reached Iran on a two-day visit on Tuesday, where he will hold talks with Iranian dignitaries on a range of issues, including bilateral ties, trade, regional security and Islamophobia.

This is Bilawal’s first official visit to Iran. He is visiting the country at the invitation of Iranian Foreign Minister Amir Abdollahian, who welcomed him upon his arrival in the neighbouring country.

Earlier, a statement by the Foreign Office said Bilawal would also call upon Iranian President Ebrahim Raisi and other dignitaries during the trip and would visit the Mashhad city on June 15 (tomorrow).

The FO statement said Bilawal was to share views with his Iranian counterpart on all areas of mutual interest.

It added that in delegation-level talks during the visit, “the two sides will review all facets of bilateral relations, including trade and economic ties, electricity supply from Iran, border sustenance markets, road and rail connectivity, and facilitation of Zaireen”.

“They will also review regional security situation with particular focus on developments in Afghanistan and South Asia, as well as combating Islamophobia,” the statement added.

According to the FO, Bilawal’s visit to Iran is part of regular high-level exchanges between the two countries. “The last meeting between the two foreign ministers was held on the sidelines of the World Economic Forum at Davos on 26 May 2022.”

In concluding remarks, the FO statement highlighted that “Pakistan and Iran enjoy close cooperative ties, based on shared geography, cultural affinities, and historic people-to-people linkages. These fraternal relations have been further strengthened through frequent high-level exchanges. The two countries are celebrating the 75th anniversary of the establishment of diplomatic relations in 2022”.